Book Review: My Song: A Memoir 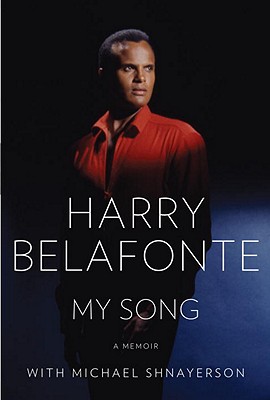 by Harry Belafonte and Michael Shnayerson

Read a Description of My Song: A Memoir

My Song: A Memoir is the story of a blessed life, that of Harry Belafonte, the mythic musician, actor, humanitarian, and social activist. With the assistance of Michael Shnayerson, a frequent contributor to Vanity Fair, this glorious account of an Old School brother, who has used his time and energy well to enable most of the human rights campaigns for a half century, came from a host of stories that could not be elaborated in his recent HBO bio-documentary, "Sing Your Song."

Belafonte, the 84-year-old Harlem-born trailblazer, was born of Caribbean immigrants, a cleaning lady and a ship's cook, and grew up in the New York's Black neighborhood in its heyday. The book follows him through his eventual childhood, his dropping out at age 17 to enlist in the Navy, and launching a fine acting and singing career after serving in World War II. He was responsible for the Calypso craze with a steady flow of hits, especially the popular "Banana Boat Song" with the catchy "Day-O" lyric. His albums sold in millions, resulting in a string of TV specials, including the Emmy-winning "Tonight with Belafonte."

The memoir speaks honestly about the racism in the entertainment business, under the rigid guidelines of Jim Crow, but the entertainer prevailed not only on television, in the music world, but as a remarkable actor. With his worldwide stardom, he teamed with the Rev. Martin Luther King, sending money to bail the reverend out of the Birmingham jail, raising money for the Freedom Rides, the Mississippi protests, the Selma-Montgomery marches, and the 1963 March on Washington. His observations of Dr. King, the Kennedy brothers, Sidney Poitier, and various civil rights leaders are priceless.

Belafonte doesn't spare himself as an artist, or husband, in his reflections. He's most candid about both his personal and professional matters. In the 1960s, he supported the African freedom movements. In the 1980s, he helped organize the star-saturated "We Are The World" single and coaxed radio stations to play the song globally and at the same time. He raised funds for famine relief in central Africa, spoke out against apartheid very early on, and hosted President Mandela on his visit to America. Domestically, he has campaigned for gun control, truces between major street gangs, and rallied federal funds for education.

"I believe my time was a remarkable one," Belafonte writes. "I am aware that we now live in a world overrun by cruelty and destruction, and our earth disintegrates and our spirits numb, we lose moral purpose and creative vision. But still I must believe, as I always have, that our best times lie ahead, and that in the final analysis, along the way we shall be comforted by one another. That is my song."

Spiritual, lucid, realistic, Belafonte's memoir should be on everybody's must-read list. It's not only the shining story of a masterful Black man, but a human being who has spent his days in thankless service to those poor, neglected and unfortunate. What an incredible life!

Read Knopf’s description of My Song: A Memoir.