Book Review: Chike And The River 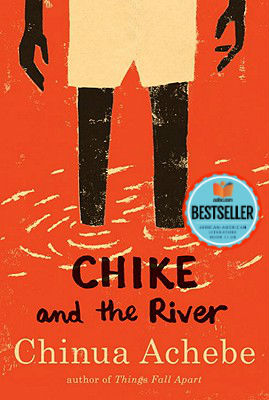 Read a Description of Chike And The River

"Chike was now 11 years-old, and he had never left his village. Then one day his mother told him that he would be going to Onitsha in the new year to live with his uncle…

At first Chike was full of joy. He was tired of living in a bush village and wanted to see a big city… But when the time actually came for Chike to leave his mother and sisters, he began to cry.

His sisters cried too, and even his mother had signs of tears in her eyes… ‘Stop crying,' said his mother. ‘Remember, you are now a big boy, and big boys don't cry.'"
--Excerpted from Chapter One "Chike Leaves His Village (pgs. 3-5)

Nigerian author Chinua Achebe came to fame in 1958 upon the publication of Things Fall Apart, which remains to this day the best-selling piece of literature by an African author. He went on to write a sequel, No Longer at Ease and to enjoy an enduring career writing not only more novels, but poetry, short stories, essays and political commentary as well.

Many might not realize that Achebe also found time to write for kids, too, including Chike and the River, a poignant, coming-of-age tale about a young boy who moves from his village to the city to be raised by his uncle in the wake of the death of his father. Originally published on the continent in 1966, it has never enjoyed a release in the States until now. This new edition arrives augmented by a score of appropriately-muted woodcuts by Edel Rodriguez, tasteful illustrations which serve to enhance Achebe's compelling children's classic plot without endeavoring to upstage the author's words.

At the point of departure, we find the young hero hesitant to leave home. However, he soon makes friends and is forced to mature quickly in an intimidating metropolis where all manner of dangers lurk. Rather than spoil any of the plot developments, suffice to say that this page-turner proceeds to embroil the protagonist in an intriguing whodunit while harking back to a simpler era when folks were far more innocent, even the bad guys.

Tenderly touching on a litany of themes ranging from loneliness to curiosity to survival to a quest for redemption, Chike and the River is a heartwarming fable which stands the test of time by virtue of an enduring universal appeal regardless of one's age or cultural background.

Read Anchor’s description of Chike And The River.