Book Review: Push Has Come to Shove: Getting Our Kids the Education They Deserve—Even If It Means Picking a Fight 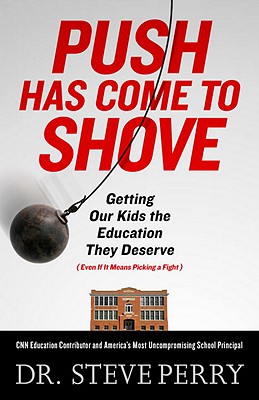 Read a Description of Push Has Come to Shove: Getting Our Kids the Education They Deserve—Even If It Means Picking a Fight

This book introduces you to the challenges we encountered and how we beat them to become one of America's most successful schools.
— Excerpted from the Introduction (pgs. 6-16)

You don't need me to recite the statistics for you. By now, everybody knows that the public school system is failing America's kids. Even those who earn a diploma are generally getting an inferior education in comparison to their private school counterparts and to children in most developed nations, especially places like Finland and South Korea.

The situation is the most alarming in the inner cities where the graduation rates are so low that lots of schools are now routinely referred to as dropout factories. This is not the case, however, with Capital Prep, a magnet school located in Hartford, Connecticut.

The institution was founded in 2005 by Dr. Steve Perry, a proponent of tough love reminiscent of the legendary Joe Clark of Lean on Me fame. Although he doesn't roam the halls with a baseball bat, Dr. Perry is just as demanding of his pupils, and he also has very high expectations of his teachers as well.

And his tireless efforts have yielded some astounding academic results, namely, a 100% graduation rate in a district with a 29% average. Furthermore, he sends all of his kids on to college, a rare feat indeed for any public school.

In Push Has Come to Shove, Perry, a frequent CNN contributor, shares his formula for success in the hope that it might be embraced and replicated all across the nation. But be forewarned, his controversial approach envisions the implementation of significant changes which would amount to a drastic overhaul of the entire school system.

For, with a glee akin to that of former Washington, D.C. Schools Chancellor Michelle Rhee, Dr. Perry advocates an assault on such seemingly sacred cows as top-heavy administrative bureaucracies, tenure for teachers, and the union inclination to protect its bad apples via what he dubs a "leave no teacher behind" philosophy. Luckily, the author only needs to point to the triumphs of his own program as proof that his innovative ideas deserve some serious consideration.

Brutally honest in its indictment of the status quo, Push Has Come to Shove amounts to an urgent clarion call for change by a relentlessly-uncompromising iconoclast who undoubtedly has his students' best interests at heart.

Read Crown’s description of Push Has Come to Shove: Getting Our Kids the Education They Deserve—Even If It Means Picking a Fight.