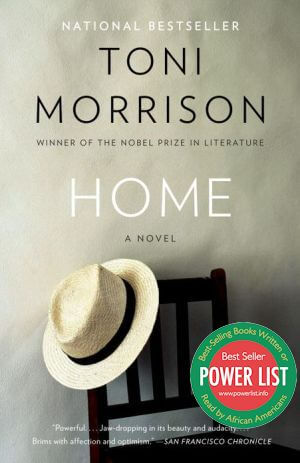 Read a Description of Home

I just recently completed Toni Morrison’s latest book Home, a novel I have been looking forward to reading because its advance notices promoted it as being set in the 1950s, an era I could relate to. Since many of Morrison’s novels take place way back in the day, I was glad she had chosen to write about what was, to me, a more recent period in history.

I was curious about how Ms Morrison would portray the 1950s which have been referred to as not only a bland and innocent time populated by the “silent generation“, but also the decade that was ripe for the civil rights movement it spawned. I anticipated she would write about a passive race of people, done with being patient, spurred into protest by dynamic leaders like Martin Luther King, and inspirational ones like Rosa Parks, and martyrs like Emmet Till, all played out against a backdrop of doo-wop music and Amos ‘N Andy TV and Dorothy Dandridge celebrity. The ‘50s I knew. Silly me.

I should’ve realized that Toni Morrison would never stoop to such mundane predictability. With Toni it’s never easy. And “Home” is vintage Morrison. So, before long, through the vividness of her prose fraught with its extraordinary metaphors, and the wretched poignancy of her characters, I was beyond reading this book; I was experiencing it. In my imagination I was there, immersed in a version of life in the 50s that was diametrically opposed to the one I led back then as a young black woman residing in a small integrated suburb of Chicago.

Crouched in the unforgiving frozen terrain of Korea, killing to keep from being killed while dodging bullets, I was there with the book's protagonist, Frank Money, as he witnessed the horrible deaths of the homeboys with whom he had enlisted in the Army, hoping to escape the dead-end drudgery that was their fate as black youth bogged down in the dusty little rural town of Lotus, Georgia. There, following Frank through the post traumatic stress that plagues him as a shell-shocked war veteran, wandering the dangerous streets of northern cities, working his way through despair with whiskey and the fleeting love of Lilly, a comely, ambitious woman not content to be his ongoing caregiver. There, listening to the frenetic be-bop music in a smoky little night club, visited between trains on his way back to rescue his gullible younger sister, “Cee”, who has been victimized and sterilized by a mad professor of eugenics.

And, in the end, there, back in the confines of a hapless little town that modernization forgot, and slavery remembered. Yet a place that is also a welcoming haven not lacking in the homespun warmth and time-worn wisdom embodied by its black inhabitants, common folk of varying degrees of good and evil who, through the worst of conditions have endured, blissful in their ignorance, secure in their belief that “be it ever so humble, there’s no place like home”.

As the book draws to its close I was also there, witnessing a reappearing zoot-suited phantom who like the style he sported, comes and finally goes with a smile on his face, signalling that "all's well, that ends well".

At 145 pages, “Home” is a short intense novel, something which always earns points with me, and a satisfactory read for those who are up to the challenge of spinning straw into gold. Finally, because it is what it is, I have no choice but to give this good thing that came in a small package, 4 stars. ★★★★ Read more conversation about this review