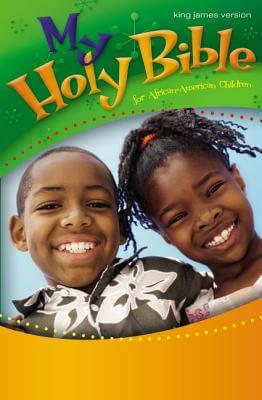 Read a Description of My Holy Bible For African-American Children, Kjv

"If you're walking down the right path and you're willing to keep walking, eventually you'll make progress."
—President Barack Obama

Given that this is the Easter Season, Christian parents might like to check out this new Bible specifically designed with black children in mind. This edition of the Good Book is basically the complete King James Version, but augmented by Cheryl and Wade Hudson to make it more appealing to African-American youngsters and teenagers.

For instance, Adam and Eve are brown-skinned in the illustrations. This only makes sense since the oldest human fossils unearthed by archeologists were found in Africa. Another bright-colored drawing features what appears to be Harriet Tubman leading a few fugitive slaves to safety via the Underground Railroad. A hint that it's Harriet is that her skirt is fashioned out of a Canadian flag, and Canada was the final station on her perilous trek along the freedom trail.

Tubman technically wasn't in the Bible, obviously, so her inclusion might strike some as a bit of an anachronism. However, she was deeply religious, and the page with her picture also contains the uplifting lyrics to the Gospel spiritual "Wade in the Water." In addition, a number of other influential black Christians are quoted here, everyone from Archbishop Desmond Tutu to Jesse Owens to George Washington Carver to Rosa Parks to Dr. Martin Luther King to President Barack Obama.

Given that the scriptures can get very dull (Ever try to read the whole Bible?), is it blasphemous to break them up with pearls of wisdom from more recent role models? Even the 10 Commandments enjoy a bit of an overhaul, with the archaic-sounding "Thou shalt not steal" being transformed into plain English as "You may not take and keep anything that doesn't belong to you."

Can I get an "Amen!" for the Hudsons for crafting a culturally-relevant interpretation of the Bible in order to encourage the up-and-coming generation of black youth to establish a meaningful relationship with Jesus Christ and the Church.