Book Review: Children Of The Waters: A Novel 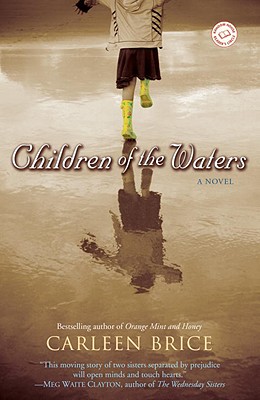 Read a Description of Children Of The Waters: A Novel

Carleen Brice has returned to the literary scene with her second novel, Children of the Waters and she's making another huge splash in literary fiction. Her clear and compassionate writing voice has given way to a novel full of love, loss and family connections. It's the story of two sisters who were separated for many years due to deception and circumstance.

Billie Cousins and Trish Taylor shared the same biological mother, but different fathers. Trish's dad was undesirable to her mother's parents, but at least he was white. Her mother Jocelyn was a wild child whose parents tried hard to tame but without success. When she came home pregnant with Trish, they decided to raise the child for their daughter because her drug addiction, among other things, made motherhood almost impossible for Jocelyn.

Billie was the result of her mother's dalliance with a black man and there was no way her parents would raise a bi-racial child. Trish was four years old when her mother gave birth to her baby sister. Even though her mother was in and out of her life, Trish loved her. Even as a little girl, she hoped that her sister's birth would make Jocelyn the mother she needed for her to be.

But it didn't happen and soon after Billie's birth, Trish was told that her mother and baby sister had died in a horrible car accident. She lived with this loss and emptiness growing up in her grandparents’' home not ever feeling like she belonged.

The real truth is that Jocelyn died of a drug overdose and Billie was put up for adoption because her father was black. Both of her grandparents died without ever telling her the truth but her grandmother left clues that Trish would unravel many years later. This "truth" would change both women's lives forever.

The author's writing style in this story is rather haunting. From the very beginning, following the story the reader feels something spiritual, that something magical is about to happen. Billie was blessed to be adopted by a middle-class African American family who were both culturally aware and very proud of their heritage. She was never told that she was adopted. Billie had an older brother, their birth child with whom she was very close. He also had no idea that Billie was adopted. Billie is a woman who always felt connected to her ancestors and drew on the strength of her African American heritage to define the woman she had grown up to be.

When Trish discovers the truth and sets out to find her baby sister, Billie is at a crossroads in her life having battled a serious illness for a long time. Now that her lupus is in remission and she is finally feeling healthy and strong, she discovers that she is pregnant. The pregnancy does not set too well with live-in lover, a jazz musician with his own crosses to bear. The last thing that she needs now is her white sister looking to connect with her and taking away everything she thought that she had been in life.

This story examines several themes; adoption and racial identity, family and reconnecting, opening up to change, accepting who you are and the importance of love between mothers, daughters and sisters. Brice was able to pull it all together in a novel where plot and characterization were fully developed to create a perfect pitch. Believable characters that the reader could empathize with and a very believable storyline made Children of the Waters a very enjoyable read.

Carleen Brice proved with this novel that she is no "one hit wonder".

Read One World/Ballantine’s description of Children Of The Waters: A Novel.