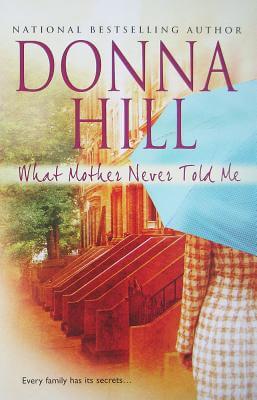 Read a Description of What Mother Never Told Me

"Every Family has it's secrets..." says national best selling author, Donna Hill in her latest novel, What Mother Never Told Me. This was a really good read. I really came to love these characters and the story line too. The author told a really good tale of family, loss of love and betrayal. It also sent a message of hope and the ending was just perfect. What else can a book lover expect?

My expectations for this read was high because I hadn't read any of the author's current work. It seems that Donna Hill's writing just gets better with time. The protagonist, Parris McKay was raised by her grandmother in the Mississippi Delta believing that her mother had died long ago. I liked Parris from the very beginning. Partly because she was a singer whose gift was heart-felt and also because she was wholesome and always seemed to want to do the right thing, to tell her truths. This character was a real grown woman. But Parris finds herself being shaken into doubt and despair; as the truth comes from her grandmother's death bed. Her mother, Emma is alive and living in Paris, France. Everything she knew to be true soon became lies and Parris knew she had to find her mother and uncover the real truth.

Parris had relocated to New York City singing jazz and R&B in a small night club in Harlem. . She had returned to Mississippi, surprised by her grandmother's deathbed revelations. For so many years, her beloved Nana had lied to her. She didn't know what to think or what to feel. After the burial Parris makes her way back to Harlem with Nick who had come to hold her hand and declare his commitment to her.

The author gave us two positive African American men in both Parris' lover, Nick and her grandfather, the country physician. I liked that about the storyline. Both men loved and supported Parris as she dug out the truth of her mother's abandonment of her when she was just a few days old. Nick had grown to want to do the right thing too and he admired and respected Parris. Her grandfather accepted the racism of the South in his generation, cutting his losses and strong in faith; he carved out a safe place for his granddaughter as she grew up. Despite the fact that he also held some untruths; he remained a rock for her to hold on to in the storm.

Emma, Parris' long-lost mother was a complicated woman who paid dearly for the secrets she held on to and the lies that followed. She finally lost everything she tried so hard to hold on to. I never would have guessed where she was coming from.

I loved the interaction between Parris and her new best friends; Leslie and Celeste. Fate had brought the unlikely trio together in a bond of sisterhood. Each one of them carrying their own dead weight of "Mama Troubles" is what bonded them. They also experienced the pain of discovering old family secrets, things that their mother's never told them. Their friendship helped all three women to find peace with the past and hope for the future. Donna Hill had a lot going on in this novel, but the pacing kept everything tied in together and the story flowed like a river. Her use of the written word is fluid and moving, descriptive and visual. Donna Hill writes a good book.

I don't want to give the story away. The plotting is really very good and the characters are just so alive, moving and weaving throughout the story. Can you tell that I really liked this novel? The ending of the book very interesting and surprising on several levels. You want to read this one for yourself. Trust me.

Read Kimani Press’s description of What Mother Never Told Me.