Book Review: Get Down: Stories 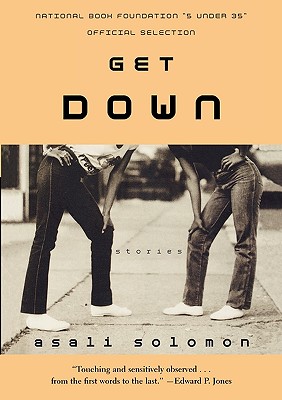 Read a Description of Get Down: Stories

Asali Solomon's collection of short stories, Get Down is a short story reader's delight. The stories are so real and many are set in Solomon's hometown of Philadelphia (which is my hometown too).  Most are about adolescents coming of age during the 1980s; and depict awkward moments of trying to find your place in the world where you never seem to fit.  The adult characters are also struggling with issues and problems that most people face. This collection will appeal to the YA (Young Adult) market as well as adult readers.

In the story; Twelve Takes Thea, we meet Thea Brown whose parents, the first in their families to attend college, are determined to give their children the very best education.  Thea is sent to a very prestigious, private girls' school in the suburbs of Philadelphia. Thea's social life, where she is one of two African American students, is told with humor.  When her best friend is transferred to a local Catholic school; her friendship with Nadja Bell deteriorate due to distance and Thea is hurt and confused. The new Black girl at the school is nothing like her friend, Nadja and Thea is forced to try to fit in with an East Indian girl who betrays her. Adolescence is such a painful experience for Thea who just wants to fit in.

William Is Telling A Story is about a student from an HBCU, on a spring break vacation, in Jamaica with some of his friends. As they sit around one night drinking and playing the game ’truth and tell’,  Williams divulges a secret about having a sexual encounter with another male student. William passes it off to a one-time thing to his friends but in reality; it was more than that and despite his relationships with women, he still desires his former homosexual lover. William's torment with his confusion about his sexual orientation is written with such class and honesty. The author seems to see inside this young man's soul.

My favorite story in the collection is The Star of The Story. Middle-aged Akousa, ’nee Betty Wilson has dreams in her head about her life "...before she got married. Before he bought a three-story in West Philadelphia, had a son, got a divorce, kept the house.’ She had come from a proper up bringing in the suburbs of Philadelphia where both of her parents where teachers.

Akousa set off to New York City to attend Hunter College under the pretense of becoming a teacher.  All she really wanted to do was escape to the Big Apple; a place with excitement, unlike where she grew up. In New York City; she dated Black men from every ethnicity and became enthralled with a Latino man, a type she had rarely come in contact with back home. Akousa re-invented herself and became what she called an ’Afrocentric Lola Falana’.

There is so much compassion for the human heart in these stories. You will get caught up in the characters and the circumstances of their lives. You will relate to the stories of Black America during the 1980s when Ronald Reagan was President, The Cosby Show was a given weekly experience and hip hop was born. Asali Solomon is a young writer to watch. Her voice is clear and her vision is unmistakably our story.

Read Farrar, Straus and Giroux’s description of Get Down: Stories.