Book Review: Under the Skin: The Hidden Toll of Racism on American Lives and on the Health of Our Nation 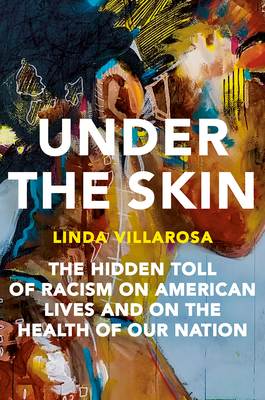 Read a Description of Under the Skin: The Hidden Toll of Racism on American Lives and on the Health of Our Nation

Following the needless deaths of my grandfather and my father, I was very interested in reading Linda Villarosa’s Under The Skin: The Hidden Toll Of Racism On American Lives And On Our Nation, which has its thesis: “In America, Blacks live sicker and die quicker than Whites.” In 2014, my father, after a poor medical regimen, collapsed and died en route to a hospital after being turned away from another nearby facility. It reminded me of the famed blues singer Bessie Smith being turned away from a white hospital in Jim Crow times.

Villarosa, an award-winning journalist, editor, and educator, begins the book with her steadfast commitment to “heal Black America.” In her revealing articles, she covers race, inequality, and health for the New York Times Magazine. As a veteran of the national health press scene, she edited the health pages for the prestigious newspaper and reported controversial issues for Science Times. Our community may remember her for the two stints as executive editor of Essence Magazine. Also, she is an associate professor and journalist-in-residence at the CUNY Journalism School and teaches reporting and Black Studies at the City College of New York in Harlem.

What I appreciate is that Villarosa is very honest about her former attitudes about the adverse effects of institutional racism on the lives of the poor and voiceless. Born into a solidly middle-class Black family on the move from an all-Black Chicago neighborhood to a white Denver community, she absorbed all of the petty biases that afflict most upward-mobile people of color. She believed all of the stereotypes of the disadvantaged in regards to health and lifestyle.

However, in 1985, she read the Heckler report, a 239-page study by the U.S. Department of Health and Human Services (HHS), revealing thousands of Black men, women, and children die from preventable and treatable medical ills. The HHS report mentioned “social determinants of health” including crime, poor housing, pollution, lack of healthy food, and shortage of quality medical services. However, the report cited there was no need for additional government funds. One established health official blasted the report for “blaming the patient will not cure the ills of America’s underserved minorities.”

Once Villarosa’s thinking on race and health was shaken, she met Dr. Harold Freeman, the director of surgery at Harlem Hospital, who told her in 1991 to look deeper and think differently. He warned her to not think of all Black people were poor and all poor people were Black. That error could lead to a massive misunderstanding of the crucial issues in health. She decides to be a spokeswoman for promoting the truth about the crisis in Black health care and its misguided evidence that it was linked to education, morals, and class.

“Since the first African enslaved men, women, and children reached American shores, there has been a Black-white divide in who survives, how they live, and who dies, from birth to end of life,” the author writes. “Despite decades of social, economic, and educational progress and what has unquestionably been the rise of a robust Black middle class, racial disparities have remained intact. Yes, something about being Black is creating a health crisis, and that something is racism. It is the American problem in need of an American solution.”

Dr. Freeman said to look deeper, and Villarosa does this to startling effect, beginning with the tragic fate of the Reif sisters, who were taken from their Montgomery, Alabama home in 1973 and sterilized by a government clinic. It didn’t matter that Minnie Lee Rief was 14 or that her younger sister, Mary Alice, was 12. They couldn’t read or write. The author further adds that about 100,000 to 150,000 poor women, mostly Black, were sterilized with government programs over decades. She contends racism tolerates the extreme abuse and defiling of the Black body, examining the cruelty of the Tuskegee syphilis experiment and the exploitation of Henrietta Lacks, a poor Black mother of three and tobacco farmer, by doctors who harvested her “magical cells” to perfect polio vaccine, gene mapping and in vitro fertilization.

White medicine, according to Villarosa, put its racist intent to its practices by falsely proving Blacks physiologically and biologically different; in their mind, our community didn’t feel emotional pain as intensely as white. Black women were raped repeatedly yet they didn’t feel fully like white women. Blacks were thought to be “hypersexual, lascivious, and wanton, with genitalia that differed from those of whites, generally perceived as larger.”

In her chapter, “Unequal Treatment,” she painfully writes that America, the only wealthy nation where women die of issues of pregnancy and childbirth is increasing. To further drive home her point, she, like the author herself, as a Black woman with an advanced degree, was more likely to die from issues of childbirth than a white woman with an eighth-grade education. Reliving the near-fatal situation of tennis star Serena Williams and her baby delivery, she asks the crucial question: “Is something else about being Black bad for a woman’s body and her baby?”

Location, location, location. Villarosa speaks the truth about our beloved communities where there is a dearth of effective medical facilities. As she writes: “Where you live matters.” Most poor neighborhoods are situated near industrial areas or landfills or other facilities emitting air pollution, causing lung disease, heart disease, or premature death. She concludes a longer, healthier life occurs when people reside in safe communities with quality health services, outdoor space, clean air and water, good transportation, education, jobs, and support systems.

While Villarosa was one of the most inquiring writers at the peak of the AIDS crisis, she gives the reader a very detailed wrap-up of the now-manageable plague in the book. Her observations cover the span of the once-deadly disease on the fate of people of color in both urban and rural settings. In these anecdotes, she is the consummate storyteller and chronicler. She is the ever passionate tour guide of the AIDS era, speaking to the unknowing of the pain and suffering with no frills and no pretense.

In Under The Skin, Villarosa understands how the virus of racism is deeply ingrained in America and no cures exist for this problem unless practical, capable leadership rises to the fore.

“Whereas in the past, race was considered a risk factor for a number of health conditions and early death, now it is clear that we must speak the harder truth: it’s not race, something about being Black, or something wrong with the Black body, but racism that makes people sick and shortens their lives. Even after science finds a cure for COVID-19, racism in medicine is the harder virus to kill. Now is the time.”

Suspicious, hesitant, and cautious as Americans may be, there’s no doubt that our citizens, of both races, would be accepting of the bitter truths published in this book. Listen closely to the journalist-activist Linda Villarosa and her provocative health parables and her glorious candor. The process of reading these words has been quite revelatory and healing. So many things need to change, so many things.

Read Doubleday’s description of Under the Skin: The Hidden Toll of Racism on American Lives and on the Health of Our Nation.