Book Review: Child, Please: How Mama’s Old-School Lessons Helped Me Check Myself Before I Wrecked Myself 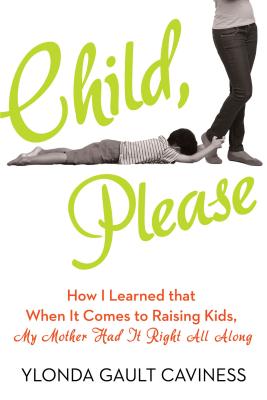 Read a Description of Child, Please: How Mama’s Old-School Lessons Helped Me Check Myself Before I Wrecked Myself

“In this wise and funny memoir, Ylonda Gault Caviness describes her journey to the realization that all the parenting advice she was obsessively devouring, as a new parent, and sharing with the world as a parenting expert… didn't mean scratch compared with her mama's old-school wisdom as a strong black woman…

With child #1, Caviness set her course: to give her children everything she had. Child #2 came along, and she patiently persisted. But when her 3rd child arrived, [she] was so exhausted that she decided to listen to what her mother had been saying all along: Give them everything they want, and there’ll be nothing left of you.

In Child, Please, Caviness describes the road back to embracing a more sane—not to mention loving—way of raising children. Her mother had it right all along.”
—Excerpted from the book jacket

Toya Graham was at home watching TV coverage of the recent Baltimore riots when she spotted her only son, Michael, in an unruly crowd of kids taunting and throwing objects at the police. Without giving it a second thought, the shocked, single-mother of six sprang into action and rushed right down to the scene to retrieve her misbehaving 16 year-old.

Cell phone cameras caught Toya lecturing and slapping Michael silly as she dragged him away. The video soon went viral and the debate began about whether or not the corporal punishment was appropriate. She was dubbed “Mother of the Year” by some and abusive by others.

The incident reminded me of a bygone era when not only your own momma but any adult in the neighborhood might straighten you out if you were messin' up. However, that strict style of upbringing has long since fallen by the wayside in favor of a politically-correct age of permissiveness.

Nevertheless, perhaps the pendulum might be ready to swing back in the other direction, as evidenced by Toya Graham's teachable moment about accountability and by the publication of Child, Please: How MamaÆs Old-School Lessons Helped Me Check Myself before I Wrecked Myself. Ironically, this delightful memoir was written by Ylonda Gault Caviness, a sister who, for years, had appeared as an expert on everything from The Today Show to National Public Radio, where she would extol the virtues of the relatively-lax, modern parenting styles, much to the chagrin of her more traditional mother.

Ylonda has belatedly come to embrace more of her mom’s supposedly-antiquated approach after becoming exasperated by the challenge of rearing her own three daughters. “Any fool could see, Mama had the whole motherhood thing down to a science,” she concedes. “Now, in my forties, I finally get it.”

An entertaining autobiography and also an overdue salute to generations of African-American females who’ve held families together while successfully meeting the challenge of raising kids right.

Read TarcherPerigee’s description of Child, Please: How Mama’s Old-School Lessons Helped Me Check Myself Before I Wrecked Myself.