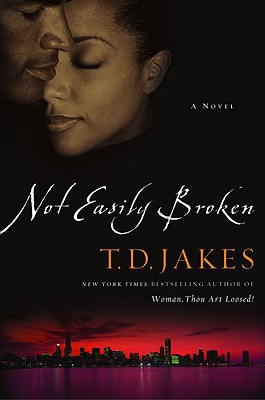 Read a Description of Not Easily Broken: A Novel

Can This Marriage Be Saved?
Dave and Clarice have been married forever; yet the things that they do not know about one another could fill up a small house.  That is the basic problem in their marriage.  They have grown apart over the years, rather than together.  How many marriages are the same way?

Not Easily Broken is the latest novel by mega preacher, T. D. Jakes about an upper class African American couple who find that their marriage has fallen into disrepair right before their eyes.  Neither one of them seem to be able to acknowledge the truth of the matter.  They have gotten used to acting like nothing is wrong until they are involved in a near-fatal car crash and Clarice is seriously injured.  As David fails miserably at his attempts to take care of his wife; he finally admits that he no longer feels needed.  Her lack of neediness and her inability to trust him with her fears is at the core of their problems.  Suddenly; the wonderful life that they have built is no longer enough.  The house, the cars and the material possessions are no longer fulfilling because they both realize that they have lost that loving feeling between them.

Jakes weaves an interesting tale of woe in this novel.  What I appreciated most about the book is that it is not your average work of Christian fiction where every little detail is wrapped up in a nice little package, because the characters are following the call of the Lord.  The characters in this book are real.  Clarice is a woman who makes you want to actually slap her.  Her self-centered persona is portrayed so realistically that she could be someone that you know.  And although the Johnsons belong to a church that they attend regularly; they don't seem to be spirit-filled believers.  They aren’t the type that lean on God for guidance; at least not until they find themselves deep in trouble which is the case with most people.  While Clarice is caught up with keeping up with the Joneses and climbing the ladder of success in the real estate business; Dave is a down to earth man who is more interested in mentoring young males in the community than making money.  His humble position as the owner of a small janitorial services business is enough for him and that bothers Clarice.  On the other hand; her disinterest in having children is a thorn in Dave's side.  You wonder what brought these two together in the first instance.

The real drama unfolds when a young, single mother and her son comes into their lives and Dave finds himself attracted to the woman and committed to the child.  Clarice realizes that she could lose her husband and finally takes some action and looks outside of her own wants and needs to try to save the marriage.  Despite a tragic turn of events; they both acknowledge that they have something worth saving.  With the help of a marriage counselor and a renewed faith in God; Clarice and Dave discover that their bond is ’not easily broken’.

The author has a gift for seeing into the hearts of women in his national ministry.  He does the same with the female characters in this book.  He also gives us some very realistic male characters and the circumstances for relationship building.  I enjoyed the story and would recommend Not Easily Broken to readers who like contemporary Christian fiction.  It was well written and kept me interested. I liked the fact that the author did not skate around the issues of temptation and sin. He also held the characters responsible for their actions and showed through scriptural references how Christian couples need to invite God into their relationships.  I'd rate it a four on a scale of one through five.

Read FaithWords’s description of Not Easily Broken: A Novel.