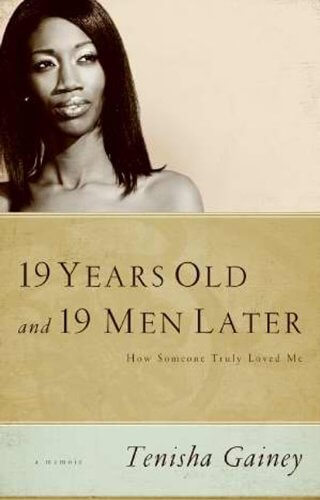 Read a Description of 19 Years Old And 19 Men Later

“I wrote this book as a guide for young women so that they won’t make the same mistakes I’ve made… I really needed someone to step in and show me that I could be so much more…
Because I have been in the bottom of the barrel… I thought to myself, ‘You can’t just sit around and do nothing when so many of your home girls are getting pregnant, chasing these no-good guys, and going down that same road you were headed.’

As I hear the latest statistics about young people—getting pregnant, contracting STDs and AIDS, losing their lives, going back to jail time and time again, and just living lives that were not meant for them—I know why they are there, because I have been in many of those places.
By the end of this book, I hope you will have learned the easy way what I learned the hard way.”
—Excerpted from the Introduction (pgs. 1-2)

Although billed as a relationship advice book, this jaw-dropping memoir really reads more like the cautionary confessions of a wanton party girl gone wild who’s done it all and was lucky enough to live to tell the tale. Tenisha Gainey’s uncensored autobiography actually reminds me of the Jack Kerouac classic “On the Road,” between the relentless joy ride and the surreal, stream of consciousness writing style.

Yes, the author is ultimately Born Again by the end, but one can only wonder whether this belated convert to Christianity will be able to resist the temptation to revert to her hedonistic patterns. After all, Tenisha’s horrible taste in men and admitted weakness for alcohol (especially a mixed drink called The Incredible Hulk) led her to rack up a lot of road miles on her body before she had turned 20. That self-destructive path was marked by substance abuse, abortion, STDs, prostitution, rape, incarceration and involuntary commitment to a mental institution.

A sucker for any guy with a flashy automobile, again and again the author made the worst dating choices imaginable. For example, she describes the night she impulsively agreed to be gangbanged in a motel room by some middle-aged, white men who propositioned her at a traffic light on their way to a poker game. She even felt flattered by a pimp who told her she was pretty enough to add to his stable since she’d attract a lot of business.

The tragedy is how she’d squandered her considerable potential, flunking out of Fairleigh Dickinson University, after having been seduced by the lure of making easy money. But the thrill of giving lap dances in seedy strip clubs, sponging-off losers for fifty bucks a pop in the boom-boom room, and sleeping with old dudes oozing AIDS sores down in Florida wore off after awhile.

Before you start pointing fingers, try walking a mile in Tenisha’s hot pants and high heels. Well, on second thought, maybe you should only think about it. She was clearly a victim of circumstances during her formative years, being born to a 16 year-old single-mom and an absentee career criminal who was always out on the street or behind bars.

How do you think you’d fare in similar circumstances? Fortunately, Tenisha’s doing fine now (cross your fingers), and the sky’s the limit with God as her co-pilot. The icing on the cake will be when Oprah options her life story for an inspirational, overcoming-the-odds biopic.