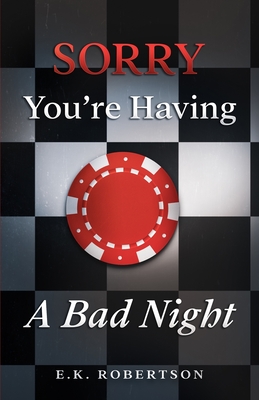 Read a Description of Sorry You’re Having A Bad Night

From its prologue to its epilogue, E. K. Robertson’s Sorry You’re Having A Bad Night delivers on the hallmarks of a good contemporary mystery, including plots ripped from the headlines, well-woven intrigue, twists and turns, tangled webs of he said/she said/he did/she did, and good descriptive details and pacing. The prologue introduces readers to an as-yet unnamed radio host and investigative journalist on the brink of premiering her brainchild podcast, with “Twenty-seven colorful and controversial episodes of a story only she could tell,” one “that would set the [Black entertainment] industry ablaze.” As she notes in her promo for the project:

“…Black entertainment has its share of unsolved mysteries and conspiracy theories. And I present to you a podcast willing to explore them. On season one of the Out & Industry podcast, we dig to the bottom of the scandals, mysteries and murders surrounding industry giants, with an inside look from the people who lived it. These are the stories that will haunt you forever, and make you question everything you thought you knew…”

Little did she know how far down the proverbial rabbit hole one of her stories would take her.

From chapter one in, we are introduced to a beguiling cast of characters whose lifestyles reek of money, power, privilege, millennial bravado, and seasoned steeliness: Evita Pitts, “wife and socialite;” her husband Samuel Pitts, media mogul and head of SamStar Enterprises; their sons, Kenny and Grant, who have their individual areas of success and fame; and Evita’s sister, Anya, and her husband Daryl, together referred to as “Richmond royalty.” Within this orbit we have Mina, head of SamStar Enterprises’ modeling agency; Tati, the publicist; and Pia, Kenny’s assistant. Somewhat removed from the sphere of influence, but by no means minor characters, are Super Vixen Sienna, a once highly sought after video girl currently hanging with the much younger Grant; Dreah, a small business owner and a link to the early days of SamStar; and CeCe, a radio and podcast host.

The story largely plays out against the ritzy backdrops of Sam’s hometown of Richmond, Virginia, where he had returned in 2019 after choosing to headquarter his ever-burgeoning enterprises there instead of in New York City. Perceived by Evita as having “a promising economic boom,” Richmond not only gave her husband the opportunity to continue growing his business while giving back to his community but also afforded “shared favor and clout in many political and social circles.” And now, emerging from the pandemic years intact, the company gets ready to celebrate its Sweet Sixteen at a gala to be held at the Greater Richmond Convention Center—casino theme and all, a nod to yet another new venture with which the company plans to align itself. Ironically, it is the night of this highly anticipated festivity that will bring together multiple elements and the dropping of a bombshell that could potentially shatter SamStar and the family that built it.

Robertson sets her “trail of clues” in motion from chapter one, with Anya and Evita’s stumbling upon some photos in an old file cabinet, while preparing the basement of one of Sam and Evita’s three homes for an appointment with a junk hauler. By the night of the gala the author has deftly set all the pieces in place for the reveal of a major scandal from the past that could turn the Pitts’ celebration—and empire—on its ears. But by the end of the night, a fresh crime brings past and present together with a jaw-dropping turn of events. Soon all the key characters are possible suspects in one way or another.

The stalkings/threats that follow in the days after the memorable event cast even more question marks over the possible solution to this puzzle. Yet even after a key facet of the complex mystery is finally unearthed, the reader may still be left wondering if or when all will be revealed, and how or if the whole mess can be junked without too much collateral damage.

In Sorry You’re Having a Bad Night, Robertson artfully frames her multilayered mystery with the titles of her prologue, “When Someone Learns Something…,” and epilogue, “…You Already Knew.” The suggestive wording is underscored by the fact that the chapters of the book are untitled. Instead, each is marked by a date and time—appropriately calling to mind the notes of a true-crime investigative journalist. Indeed, the events of one night strikingly inflate the promises of the “Out & Industry” podcast premiere mentioned in the prologue.

Though the cheeky words in the novel’s title are said twice to one character in particular, it is safe to say that—after turning up in their best dos in keeping with the theme of the event—no one had a good night out on the occasion of this gala. Who knew what would transpire? Life is a gamble after all.