Book Review: Surviving Chaos: How I Found Peace at A Beach Bar 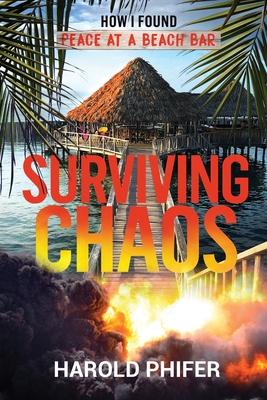 Surviving Chaos: How I Found Peace At A Beach Bar is Harold Phifer’s memoir of childhood abuse, family dysfunction, and his search for peace. Starting in the present, we go back to the past, then further back to his childhood, looping back and forth in interwoven narratives, as he recounts his life.

“I grew up in a severely dysfunctional environment where I was constantly manipulated by a controlling aunt, abused by my mindless big brother, and shamed by my schizophrenic mom. Ducking, dodging, and going un-noticed were daily rituals.”

For more than fifty years, the toll and full extent of the far-reaching and long-lasting damage of Phifer's childhood trauma remained a secret, not only from those who knew him, but also from Phifer himself. The shocking memories of his early physical and emotional abuse at the hands of those who should have protected him, blasted to the forefront of his consciousness during a bomb attack in Afghanistan that “levitated” the building. “My emotions were clanging and crashing so hard, my mind flipped through all fifty-six years of my life. I had an out of body rush that sent me back to my early days in Mississippi. Growing up, whenever there was violence and mayhem, there was Mom.”

Phifer’s journey through memory to healing and acceptance is prompted by a beachside chat in Thailand, where he's taken refuge after the trauma of the bombing. He’d been working as an air traffic controller in Afghanistan when the Taliban attacked. Months later, he’s spending his days in a drunken haze when he's approached by “another lost soul.” Dylan is a burned-out retired banker from New York, who is drinking and watching pretty girls on the beach, not unlike Phifer. Noticing a “fellow drunkard” and wayward spirit in Phifer he approaches him, and with a promise to fund his stupor with unending booze, convinces him to tell his tale. As Phifer relays the story of his life, he uncovers deeply buried truths that lead him down a hole that is deeper and darker, than he could have imagined.

Phifer was born the second oldest of four boys to a mentally unstable and criminally abusive mother, and “cared for” by a manipulative and self-serving aunt. This, combined with the lack of a father figure in his young life, oriented Phifer to the chaos and taught him how to navigate it. Because he was never acclimated to what was normative, it was through chaos that he viewed the world. He was ultimately, the luckier of his siblings. His youngest brother Carl, ended up in prison for murder, and was killed within three years of his release. His older brother, Jerry, the golden boy, the favorite, was good looking, light skinned, charming, and vain, and doted on by their Aunt Kathy, and everyone in their community. But his vanity would be his undoing as it lead to a life spent easily getting by on his appearance, which didn't equip him for the complexity of adulthood. Jerry spiraled into alcoholism and gambling when his good looks, and the charm and magnetism that came with it, faded.

As a child, Phifer was often left unattended, didn't have enough to eat, and wasn’t given the care he needed. To stay alive, he learned how to live with the chaos of his daily life. Quick-witted, he became canny and calculating, sometimes meting out the same cruelty he received, to not be the target he often was. There was no father-figure in Phifer’s early life. His father wasn’t in the picture until he ran into him one day at the library. A young man, Phifer went over to talk to a couple of girls when his father walked in. Knowing the girls his father greeted them. He then looked at Phifer and said, “Hello, and who are you, young man?” They eventually developed a relationship, however, the early emotional damage was already done.

Phifer was either drawn to chaos or he attracted it. It was prevalent during his turbulent school years, in the abusive women he dated, in the workplace where he suffered, “pure, raw, racial prejudice,” and when he was an independent contractor in Afghanistan. Finally, fully immersed in, and almost killed by chaos, he sought peace on a beach.

Like Dylan, I kept wanting Phifer to get back to what happened after the blast in Afghanistan where’d he’d started the tale. Not because his recounting of his early life was mundane, or because the fast paced, and engaging, recounting of the bomb blast was interrupted to recount his childhood, leaving us with a cliffhanger. It's because Phifer seemed to not make the connection between his chaotic early life and the part he played in the chaos. By continuing to trust his overtly manipulative Aunt Kathy, or letting himself be taken advantage of by his brother, or his dysfunctional relationships with women, he allowed the chaos to thrive. Without his understanding of this, his childhood recounting became a litany of the abuse he permitted and at times, even perpetuated.

As I reached the end of the book, I wondered, what’s the message? What does Phifer want to tell us, teach us, what can we learn from his life? Is it that if you’re born in chaos then all you’ll know is chaos, that it will always find you, or you’ll seek it out, because it feels familiar? But isn’t life itself chaos? We live with chaos daily. How chaotic our life is, is not wholly dependent on how much chaos is in our life, but how we handle the chaos. Understanding the role we play in amplifying, or perpetuating it, helps to keep it at bay.

Ultimately, through the cathartic power of storytelling, Phifer realizes that his mother's death in 2017 unmoored him. Her madness was his north star, it gave him his bearing. It was familiar. He navigated from a place of chaos, he functioned within it, it drew him to it and he, perhaps sought it out, ultimately taking a job in Afghanistan during the height of conflict. Months later sitting on that peaceful beach telling his tale, Phifer realizes that for most of his life, chaos was his only constant, and without the defining chaotic relationship with his mother, he needed to seek it out again. “Losing Mom destroyed my inner balance. I was always on guard when she was around. Now, I’m unattached, floating, drifting out to sea. Water is no longer wet and music has no sound. Her death removed many challenges but left no answers.”

Having known mostly chaos, sometimes besting it, sometimes not, Phifer didn’t fully feel comfortable with tranquility, with idling his life away in the sand and surf. Like his chaotic life before, he needed “to be stimulated.” He decides to leave the serenity of the beach, and return to Afghanistan. “The war, poverty, the bombing make no sense, but it has been my world. My life before was nothing but a series of obstacles to overcome… I have faced death and survived, by the grace of God.” With this knowledge he finds a sort of peace, which ultimately leads him not away from chaos but right back into the very heart of it.

Read another review of Surviving Chaos written by Denolyn Carroll