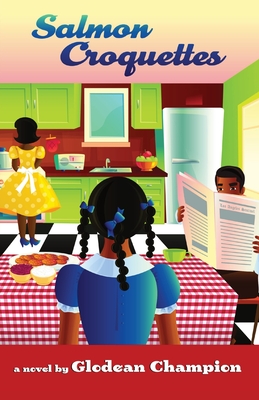 Read a Description of Salmon Croquettes

Salmon Croquettes is a debut novel rich in prose. The book is loaded with purposeful dialogue and heartwarming descriptive scenes. The novel’s authentic dialogue rings familiar and inviting. The well written scenes are reminiscent of African American culture in the ‘60’s and ‘70’s. Champion uses historical events, newspaper headlines, television shows, poetry, and music to place the reader in the Civil Rights era. One could easily classify the novel as a coming-of-age story, a rite of passage tale about a young woman coming to terms with her homosexuality, and this critique is partly true, but in Salmon Croquettes so much more is offered. The reader witnesses generational mother daughter conflicts, class divisions within the Black community, homophobia, and American racism.

Champion’s twelve-year-old protagonist, Zayla Lucille McKinney, desires a mother’s love and a mother’s positive attention due to her own mother being emotionally dwarfed by insecurities. The novel emphasizes the importance of healthy parents. Champion does not sugar coat this message; parents should be mentally, physically, and emotionally healthy. The scenes where unhealthy parenting occurs are difficult to experience, but they do add to Champion’s development of healthy parents. Pure Joy is felt when Zayla is with those with positive parenting skills. The novel does not shy away from depicting homophobic parents within the Black community; these scenes may also prove difficult for many to read due to Champion’s realistic characterizations.

The term, “airing of one’s dirty laundry” comes to mind when considering how social class was discussed in the novel. Champion reveals class division within the Black community in high school dating, in churches, in social groups, in political actions, and in the choosing of friends. She also includes skin color in class division within the Black community. As in life, Zaya had more than one problem and more than one situation to overcome. She learns about social class within the Black community through relationships with people: a Vietnam vet, her etiquette class classmates, and her family. What is certain to garner Champion “kudos” from many is her retelling of Blacks crossing social class lines to join together in response to police misconduct against a Watts community member. The community’s initial response was immediate and one of unity.

Police misconduct was the most prevalent form of racism discussed in the novel. Again, Champion’s depictions are reality based. The brutal nature of police misconduct in 1965 Watts was equal to the brutal nature of police misconduct in 2021. The lies police told in the novel were familiar to the lies told by police to today’s media. The same disregard for Black personhood and property were present. The same refusal to see Black Americans as people was present then as it is today, and the community’s reactions to looting then was just as varied as it is today. Some chanted “Burn Baby Burn” others were silent — waiting and hoping to be treated different.

Homophobia appeared to be the norm in era of Champion’s novel. Religious leaders, grandparents, neighbors, and family were all displayed with their prejudices. The reader experiences Zayla’s isolation in mind and body: her being told she has moved away from God, her feeling like it is only her, her wanting not to like girls, her praying not to like girls, and her being betrayed by those she trusted. Watching Zayla’s level of self-acceptance rising throughout the novel is the most satisfying part of the read. Watching her pick and choose the information to value and what to discard is memorable. Her understanding that adults are flawed happens in pivotal points in the read and this speaks to Champion’s ability to write an engrossing story. What is truly masterful about the work is the subtle way Champion artfully intertwines social, political, and racial topics within the story. These are historically heavy topics, and they read feather light as one shares Zayla’s growth and development through her Black community.