Book Review: Getting It Wrong: How Black Public Intellectuals Are Failing Black America 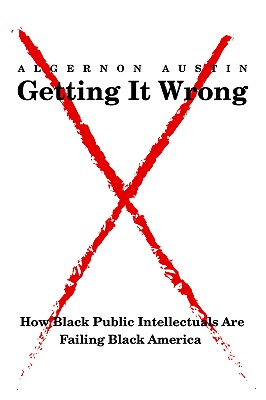 Read a Description of Getting It Wrong: How Black Public Intellectuals Are Failing Black America

"The latest twist in the history of stereotyping is that the black middle and upper classes are now the loudest voices. Bill Cosby and other prominent blacks are describing poor blacks as lazy, irresponsible, sexually-promiscuous, and criminal.

On one hand, this should not be surprising because these stereotypes are part of the American culture in which black Americans are raised. On the other hand, it is surprising because the black middle and upper class have historically been among the strongest defenders of blacks. However, the fairly recent convergence of the great success of a large number of blacks with the strength of conservatism in contemporary American society has caused this surprising event to occur.

This book tries to replace false stereotypes with real evidence about real people. We cannot effectively analyze and solve problems facing blacks in American society until we disrupt the cultural reflex to think in stereotypes about blackness and whiteness.’
’Excerpted from the Preface

Last year, Michael Eric Dyson wrote ’Is Bill Cosby Right? Or Has the Black Middle Class Lost Its Mind?’ a book in which the author launched into a vicious personal attack on Cosby rather than debate the merits of the comedian's controversial remarks about the dire state of black America. In my review of that trashy tome entitled ’Has Michael Eric Dyson Lost His Mind?’ I pointed out that his woeful work left the issue essentially unaddressed. I subsequently even went so far as to request an interview with Professor Dyson on the same subject several times, but apparently he's been too busy with more important matters such as making cameo appearances in brainless blaxsploitation flicks like Waist Deep to concern himself with the cultural debate he claims to have addressed and dispensed with.

Fortunately, another professor, Algernon Austin, decided to examine the question in a fair and serious manner, and the upshot of his efforts is ’Getting It Wrong: How Black Public Intellectuals Are Failing Black America.’ Austin, who has taught sociology at DePaul and Wesleyan Universities, takes not only Cosby, but even Dyson and other members of the African-American intelligentsia to task, including Harvard's Henry Louis Gates, TV talk show host Tavis Smiley and NYU's Derrick Bell.

The author's primary contention is that ivory tower blacks, who have lost touch with the community, now feel comfortable indicting less fortunate black folks they left behind for exhibiting symptoms simply long-associated with poverty. Such blaming of the victims is destructive, Austin suggests, because it relies on a stereotyping which makes it convenient for Middle America to see skin color rather than a racist, exploitative economy as the explanation for the plight of the least of their brethren.

He goes on to indict the legal system as ’the most anti-black institution’ in the country arguing that it defines ’criminality as an inherent characteristic, as a trait, of blackness.’ As proof, he points out its relatively hands-off treatment of white-collar criminals, a category comprised overwhelmingly of white perpetrators. These crooks are rarely pursued by police, and even if convicted, tend to get sent to country club penitentiaries, despite the fact that their thefts typically wreak many magnitudes of economic hardship on their unfortunate victims.

Consistently separating myth from fact in this fashion, Getting It Wrong is an excellent opus in that it deliberately deconstructs the unfair and color-coded stereotypes which the both the black bourgeoisie and the white mainstream culture have come to resort to when referring to African-American ghetto-dwellers. Is Algernon Austin right? He makes a persuasive case, and he certainly hasn’t lost his mind.

Read iUniverse’s description of Getting It Wrong: How Black Public Intellectuals Are Failing Black America.