Book Review: The Lazarus Parable: A Revelation For The 21St Century 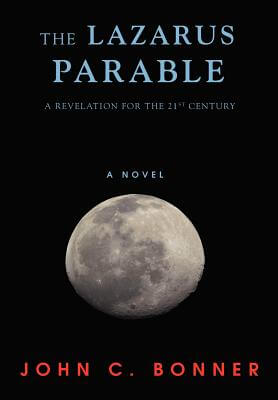 Read a Description of The Lazarus Parable: A Revelation For The 21St Century

The Lazarus Parable by John C. Bonner is an apocalyptic tale which chronicles what the future holds for the planet Earth in the 21st century. It is an ambitious undertaking representative of the biblical sci-fi genre popularized by of the "Left Behind" series, and calling it a cross between "Star Trek" and "The DaVinci Code", would come close to describing it.

The story gets underway in the remote little black town of Onyx, Mississippi, where while loitering in a park, 2 of the main characters are approached by a brigade of strange-looking creatures who, as described, would rival in appearance, hoopster Dennis Rodman and Bat Man's side kick, Robin. After greeting this group of wayfarers, Harry Gordon and Tony Jones learn that their new acquaintances have just disembarked from a spaceship and have come to aid and assist Earthlings in the pursuit of space travel.

As news of the aliens' arrival spreads, military officials converge on the scene and arrests are made. But cooler heads prevail and with the approval of the powers-that-be in Washington DC, the mission to bring Earth up to speed in space technology gets underway, and is eventually accomplished. With their goal reached, the extra-terrestrials then take their leave. But not before sharing with a chosen few the shocking truth about who Humans are really descended from, and why they are in great danger.

At this point, the plot diverges, and focus shifts back and forth between a religious setting and a secular one. Charismatic young minister, Jimmy Jordan, and his disciples are perusing the inner space of the Bible, searching the scriptures for hidden clues that will verify what the aliens have revealed. Other characters are among those who are traversing the highways of outer-space, capitalizing on the knowledge the aliens have imparted to them.

But disaster looms on the horizon. The danger Earthlings have been warned about takes the form of aliens from another galaxy who are preparing to descend on Earth to avenge what was done to their ancestors by the ancestors of Earthlings. What ensues brings about a reversal of fortune as the world is plunged into a long dark period of trial and tribulation. Planet Earth becomes engulfed in an atmosphere that pits the spiritual against the satanic in a battle not only for the soul of mankind, but for the salvation of Reverend Jimmy Jordan, whose faith has faltered. On and on this conflict goes until on the momentous date of 6/6/66, the fate of Earth's heirs is made known, and the book ends.

The sub-title of this epic novel proclaims itself to be "a revelation for the 21st century." For me, this revelation could've benefited from a resuscitation. More like a bible than a parable, this book's length would not have mattered had it been a page-turner that held you in its grip. But it wasn't. I kept reading and reading, plugging away and getting nowhere. The text was too dense, too full of gloom and doom, too bogged down with dialogue that lapsed into monologues as the characters became conduits for sermonizing and editorializing and expounding. Unfortunately, the author stumbles into the pitfall of assuming that what engrosses him will likewise captivate the reader.

As promised, The Lazarus Parable does deliver a message. But it doesn't deliver a punch because it was more like a documentary than an adventure. I think the premise of this book would've fared better in a non fiction venue, or at least within the parameters of the real world. This is because the author couldn't quite pull off a novel that embedded biblical predictions in a science-fiction setting. How seriously can we take his solemn pontificating if everything except his predictions is fantasy? But, this poses the ambiguity of biblical-sci-fi, and for fans of this genre, who are undoubtedly able to suspend their belief systems, with a good job of editing, this book could fill the bill.

To his credit, Bonner does have a good command of the language, and although the story he tells is a tedious one, he is adept at the chore of telling it. The good guys are admirably noble and the bad guys menacingly evil, and a crash course in the logistics of space travel along, with a dash of trivia about certain religious taboos and traditions were sidelights that did help to break the monotony.

Would l recommend this monumental labor of love written by a scholar who has had close encounters with the Bible for 25 years? Yes, - if you're an insomniac. But for me, The Lazarus Parable was a novel that simply did not sustain my interest.

Read iUniverse’s description of The Lazarus Parable: A Revelation For The 21St Century.