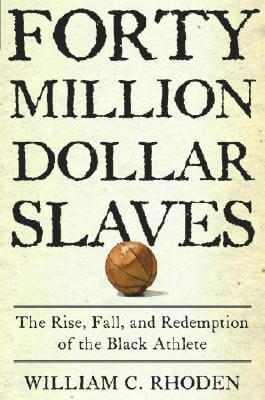 Read a Description of Forty Million Dollar Slaves: The Rise, Fall, and Redemption of the Black Athlete

"The Belt carries young black athletes out of black America and introduces them to a world with very few African-Americans, a world of white agents, real estate brokers, bank presidents, trustees, and lawyers. The fact that so many of the athletes' closest advisers are not African-American means that they’re never around black models of leadership, a situation that undermines their own ability to become leaders, rather than pampered, passive followers.’
’Excerpted from Chapter 7, The Conveyor Belt

Once upon a time, prominent African-American athletes were inclined to leverage their fame as a means of confronting racism. From Paul Robeson to     Jackie Robinson to Muhammad Ali to Jim Brown to Arthur Ashe to Olympic medal-winners Tommie Smith and John Carlos, there is an abundant legacy of commitment to the black community.

But judging by today's socially-unenlightened crop of sports icons, one might suspect that rich history of activism and advocating for the underclass to be more fairy tale than fact. For the once-widespread dedication to hard-fought, collective advancement has been all but abandoned by the current generation of superstars, at least according to William C. Rhoden, author of Forty Million Dollar Slaves: The Rise, Fall, and Redemption of the Black Athlete.

The tone of today's ballplayer is perhaps typified by the NBA's Grant Hill who acknowledges that, ’When you're making $200,000 every two weeks, it's hard to get angry about anything.’ Rhoden, a sportswriter for The New York Times since 1983, concedes that most pros now make more money in one season than his childhood heroes could accumulate over the course of their entire careers. But he also argues that these financial rewards ought to translate into an even more effective advocacy bloc for African-American advancement.

Yet instead, we have entered the ago of the apolitical mega-star, carefully-packaged products such as Michael Jordan who Rhoden says went to great lengths to cultivate a non-threatening, ever-neutral public image. The author points out that Jordan was a ferocious competitor of unparalleled drive on the court and in the corporate world but not ’when it came to confronting racism.’

Insights such as this is what makes Forty Million Dollar Slaves a priceless and prophetic discourse on the path of blacks in sports, dividing its time between African-American history and the present-day dilemma where we find individualism, commercialism, materialism and blas' attitudes celebrated at the expense of any concern about a black agenda.

Also of interest is how the book, posthumously, gives credence to most of the notions which cost the late Jimmy the Greek his job when he related anecdotes about ante bellum plantation owners breeding slaves for muscularity. Now we learn that blacks did dominate the field back then whether in horseracing as the country's first jockeys or in track as sprinters at events staged to entertain white spectators.

Perhaps most significantly, it asks some very meaningful questions about franchise ownership, pointing out that the integration of baseball simultaneously signaled the demise of the black-owned Negro League. For while Brooklyn Dodger owner Branch Rickey has invariably been hailed for having signed Jackie Robinson, here, he is blamed for helping keep black competitors out of the big leagues, rationalizing preserving a white monopoly with ’There is no Negro League as far as I'm concerned.’

Overall, Forty Million Dollar Slaves still offers an optimistic message since thousands of black athletes are now blessed with the means to make major statements about the way their industry is run, provided they remember their roots and somehow develop the wherewithal and inclination to get involved. Nonetheless, such a salvation is not guaranteed, since as the Bible states in Proverbs 29: 18: ’Where there is no vision, the people perish.’