Book Review: 32 Ways To Be A Champion In Business 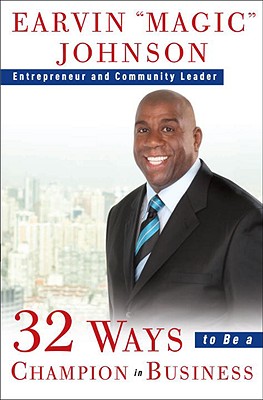 "While I spent 14 years in the NBA playing basketball, I always had bigger dreams of building a business empire.  It was not an easy transition, however. I stumbled now and then as I began More than a few skeptics told me that I was wrong to focus on underserved urban communities' They were wrong. Where they saw only problems, I created abundant opportunities. Today, Magic Johnson Enterprises is a multimillion dollar company.

There were many people who felt that my life was over when I discovered that I had HIV. Again they were wrong on all counts. I am grateful to be as healthy, strong, and every bit as energetic as in my NBA days. I hope that you will learn from my experiences and benefit from the lessons I've shared. My goal is to help you fulfill your business dreams while bettering your life and the lives of those around you."
’Excerpted from the Preface (pages xiii-xiv)

I've generally been very disappointed by how-to books by successful businessmen claiming to be sharing their knowledge with aspiring titans hoping to follow in their footsteps. For instance, Donald Trump's Think Like a Billionaire: Everything You Need to Know about Success, Real Estate and Life turned out to be little more than a misleading exercise in name-dropping and self-promotion which devoted precious little attention to the subject at hand.

By contrast, Magic Johnson's 32 Ways to Be a Champion in Business lives up to its billing, even if its cute title conveniently trades on the number he wore when he was with the Los Angeles Lakers. For the NBA Hall of Famer-turned-Captain of Industry has distilled his business philosophy down into some sound practical advice for folks wiling to roll up their sleeves to try to pull themselves up by their bootstraps.

The book is broken down into four parts: Business Strategies, Business Plays, Business Options and Business Leadership, with each of those sections containing between seven and ten chapters each. Magic's sub-headings give you a good idea of what to expect, as his suggestion include everything from ’Create a guiding vision’ to ’Buy a good business and make it better’ to ’Zealously protect and build your brand’ to ’Think of your employees as fellow entrepreneurs' to ’Focus on the customer and you will never go wrong.’

Informative and inspirational, and written in an easy-to-read accessible style, 32 Ways to Be a Champion delineates sensible strategies for every stage of doing business, including financing your start-up, marketing, building your customer base, entering partnerships, expanding the company, and giving back to the community through philanthropy. A solid primer on overachieving from a brother who has enjoyed not one but two world-class careers, while simultaneously miraculously winning the battle of his life against HIV.

Read Crown Business’s description of 32 Ways To Be A Champion In Business.