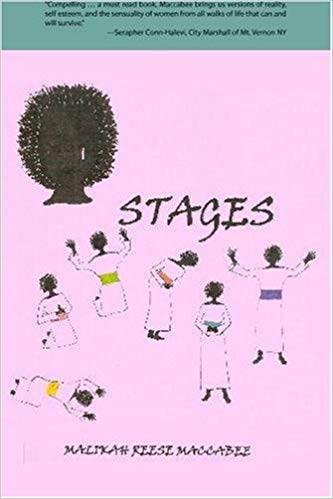 Read a Description of Stages: (Part 1 Of The Stages Trilogy)

Into Each Life Some Rain Must Fall

STAGES, the debut novel by Malikah Reese Maccabee is a wonderfully written and very engaging story about women of color in crisis, broken women whose faith holds them together despite the adversity, pain and betrayal that they have faced. They come together in various stages of conflict from all over the world to attend a women's conference in Atlanta sponsored by Women of Culture United (WCU).

It's Christian themes give it an inspirational flavor while the complete exposure of these female characters that explore the reaches of their lives and the dynamics of relationships with family, friends and lovers makes it a good example of women's fiction.

The issues that these women face in both their professional and domestic lives are familiar themes that women of color experience. The author examines the pain caused by the men in their lives and also the role that these women play in their own mistreatment.

The characters are varied. Renowned psychologist, Dr. Thea Bell whose husband's betrayal after 24 years in a marriage, making his needs her most important focus comes to the conference as a presenter. Yet; she finds herself with some of the same needs as the women she has treated over the years in her family practice. Xavier Freeman is a woman whose husband of 30 years has had numerous affairs and even has taken a second wife while she looks the other way.

And there is Maggie Kolde, a successful business owner, daughter of the well-respected Rev. Dr. Solomon Kolde who has watched her mother Faith, support her father in the church through years of infidelity with various women. Her parents' dysfunctional marriage has left a bad taste in her mouth and she has a love/hate relationship with her father while failing to understand her mother's reasoning. Another woman is brought to the United States from her native Haiti as a young girl to work as a nanny for a rich white couple and is used as a concubine by the husband for years until she is replaced by a younger Haitian girl. This experience leads her to unsavory relationships with men in her adult life.

STAGES gives readers the back story, the lives that these women have lived that brought about their pain and sorrow. They come together to resolve their issues in a non-judgmental setting offering support and seeking solutions. These women come to this conference saying; "We have had enough!"

The novel ends with the opening session of the conference where the women have gathered to not only form a bond of sisterhood but to lift up one another in love and to free themselves of the bondage that has kept them captive to pain, uncertainty and despair.

STAGES is the first book in The Stages Trilogy. Part II: Break Through will be the next installment. The story kept me reading despite the fact that the entire book is filled with typos and misspelled words, run-on sentences and a lack of punctuation. The book needed a professional edit because the various errors took away from the enjoyment of the read. Despite my angst with a lack of proper editing; I was engrossed in the storyline, as well as the characters. I also found the author's writing style to be full of imagery with a lyrical flow that I really liked. This author deserves a second chance and I hope that she learned the importance of professional editing as poor editing can kill a good book.