Book Review: I Dreamt I Was in Heaven - The Rampage of the Rufus Buck Gang 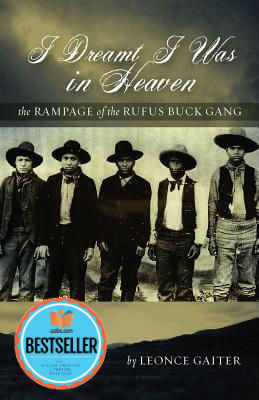 Quick! Can you tell me if you knew that there was a multi-racial teenaged gang terrorizing the west? Only once in a great while does a writer come along who defies comparison and compromise-- a writer so original, he redefines, or even gives a different spin the way we interpret historical lore. Leonce Gaiter is such a writer and The Rufus Buck Gang’s notorious plumage was such a part of this lore that gives the author’s new book a sense of virtual reality.

I Dreamt I Was in Heaven is a true story depicting characters that drive this story beyond the Wild West’s reputation for anything to go awry outside of the law. But guess what? It does just that! the notorious “Hanging Judge” Isaac C. Parker, the noted outlaw Cherokee Bill, Henry Starr (a distant relative of Belle Starr) and the ‘gang’ themselves relegates this turn-of-the-century fare a bit nefarious but manages to give it the edge to make it a page turning delight. The gist of the story deals with the government’s self-serving intent on confiscating Indian land under the guise of a co-opt settlement rendering them sharecroppers for a mere pittance.

The author has gone on record claiming to want to be extraordinary and write as such, and it’s easy to formulate scenarios where the art of transforming history to settings that’s able to fictionalize but stay close to the truth. Mr. Gaiter’s writing style is unique where he gives each character their chance to impart individual thoughts where retrospect allows the drama to move rapidly along. The novel opens with a mob gone amok seeking revenge and retribution toward the recently captured gang under the protection of marshals awaiting the hanging noose. Flashbacks are used, by the author, to build a scene that continues until the coda justifies when death comes knocking. Interesting analogies on the racial makeup of the characters allows the author to add a train of thought where the Judge uses transcendental thoughts of Darwin in an attempt to justify his philosophy in bringing order and civility to the region, while eradicating undesirable elements.

Inspired by a dream and Cherokee Bill's legacy, Rufus and his teen friends under false pretension on a misguided and ill-fated rampage erroneously believing their antics would ignite an Indian uprising to reclaim their land. For nearly two weeks during the summer of 1895, they instilled unmitigating fear throughout the land. Their modus oprandi? Murder, rape, arson, thievery and malicious arson, often having no compassion for the afflicted. Eventually the gang was captured, but a twist of fate gave reason for conviction to be served on a single charge of gang raping a white woman!

To understand this story, you’d have to know how Judge Parker’’s reputation was bigger than life and how much he was feared...but the author chose to paint a time frame nearing the end of the Judge’s judicial influence which covered 74,000 square miles of lawless indian territory against the backdrop for that extraordinary flare to give this book credence.

I loved this story for many different reasons. Namely because I’m a history buff, and secondly, Mr. Gaiter goes deep into the psyches of Rufus, the Judge and the victims offering poignant and believable angst that gives the impression that you could’ve been there to witness any scene in the book. It does a great job in delving into a few of the harsh realities of the West that yearns to break into the 20th century unscathed. Instead, the Rufus Buck gang exposed yet, a bit of history that few imagined but turned out to be real. Sadly to say, the violence and injustice that shaped America's westward expansion was but a small part of why native Americans in general, and people of color specifically suffered but didn’t stand still to allow status quo.

This book is particularly recommended for history buffs with an interest in the Wild West, Native and African-American History, and how a little-know fact shaped a dream!


Read Legba Books’s description of I Dreamt I Was in Heaven - The Rampage of the Rufus Buck Gang.