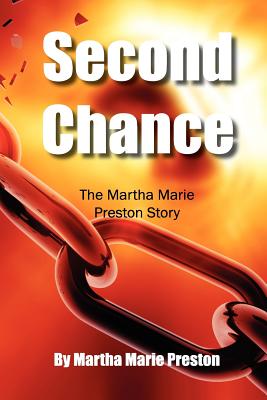 "I had finally run out of options… There I was. Locked in a tiny jail cell, staring into space and wondering how my life had come to this: A forty-year sentence for a drug crime.

Not long ago, I was a respected, churchgoing, pillar of the community, contributing to the less fortunate and living a life of luxury. It never dawned on me that the double life I was leading—upstanding citizen, by day, and drug conspirator, by night—would come to such an abrupt, disastrous end.

And yet it had… My future seemed bleak... But that's not where my story ended. It's actually where my life began… This book is about a second chance."
—Excerpted from the Introduction (pg. iv)

Martha Marie Preston was born in an eastern section of Houston, Texas known as Royal Terrace on April 9, 1949, the 7th of 12 children. She was raised by her divorced-dad from the age of 8 on, after her mother, without explanation, decided to abandon the family.

In the absence of a maternal figure, Martha turned into a rough-and-tumble tomboy, due to being teased mercilessly about her hair ("Ragmop!") and skin color ("Midnight!") by kids in the neighborhood. Preferring to hang out with the boys, she walked around topless until the age of 11 when her breasts began developing.

At 14, Martha lost her virginity to a friend of one of her older brothers, and she ended up pregnant fairly soon thereafter. And she was both married and divorced by 17, as growing up fast was par for the course in her neck of the woods.

Martha opened a diner and then a nightclub to provide for herself and her daughter, Cheryl, and quickly discovered that she had a knack for business. Regrettably, she also allowed selling cocaine to become part of the operation, a decision she would come to regret when it eventually led to her downfall despite making millions of dollars and owning a Rolls Royce, a suburban mansion and other trappings of success.

Convicted by a jury of her peers and sent up the river in 1998, Martha became suicidal and bottomed-out behind bars before being Born Again and rededicating her life to Jesus Christ. Ultimately, through faith and the power of prayer, she was granted parole well before the completion of her 40-year sentence.

This cautionary tale about a fall from grace and ultimate redemption unfolds blow-by-blow style in Second Chance: The Martha Marie Preston Story. The warts and all memoir is a real page-turner you'll probably read in one sitting, given the author's heartbreaking honesty while reflecting about the pitfalls of living life in the fast lane.

As gritty and as forthcoming an autobiography as you're ever apt to encounter.

Read To Be Determined’s description of Second Chance: The Martha Marie Preston Story.