Book Review: Tales Of A Jailhouse Librarian: Challenging The Juvenile Justice System One Book At A Time 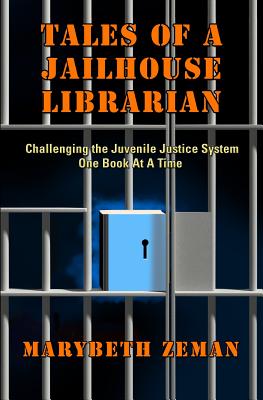 Read a Description of Tales Of A Jailhouse Librarian: Challenging The Juvenile Justice System One Book At A Time

After almost thirty years as a high school teacher Marybeth Zeman quits her teaching job and becomes a transitional counselor in a jail. In Tales of a Jailhouse Librarian she chronicles her experiences and those of the teenaged boys she meets as she provides them with the books that become their escape.

ZemanÆs first day on the job makes it clear that she “doesnÆt have a clue”. After a high school full of cheerleaders she finds herself in jail, surrounded by troubled boys, “with largely very dark complexions, various chocolate and tan and beige skin tones—an occasional white, freckle-faced, fair-haired boy”—all with really desperate needs.

As they ask for books they love, to escape the boredom of their cells, it ignites her passion for books, that same passion that had prompted her to get her masters in library science, which was sitting unused in a drawer because of job shortages. Zeman got them the books they loved, and they started to read them. They became their escape. ThatÆs when she figured out the way to make the connection she needed to counsel them, and that she could help them escape, even if just for a little while.

“We all understand it is a place of escape. Each and every book, an opportunity for escape… To be freed from the boredom and tedium that are the inmates daily companion... To be healed to be comforted. To be inspired. This is a tough place for God to put a 17 year old. But I know God had a reason for putting me here... To let me see just how big hope can be when it rekindles its flame.”

Part memoir, part social commentary, Zeman addresses pertinent social issues affecting African-Americans and young people of color through their stories, which she tells in short vignettes. Like Diquan, 17, who needs comfort and direction after he learns that his 16-year-old brother was shot and killed. “The only reason Diquan had outlived him—he was in jail.” Or Hector, who was trying to find a family in a gang, instead finds himself facing the death penalty at 19. These are real stories about real kids in prison, kids the same ages as my nephews.

Riveting and well written; Tales of a Jailhouse Librarian is compelling, engaging and insightful. Zeman wisely makes her point by simply telling the stories of the boys she counsels and reminding us that part of being young is making mistakes. In so doing, she makes a good argument about education instead of incarceration. “Jail isnÆt always the best solution. One million dollars invested in incarceration reduces 350 crimes; one million dollars invested in education reduces 600 crimes.”

Zeman aligns Tales of a Jailhouse Librarian with President ObamaÆs My BrotherÆs Keeper Initiative to help boys and young men of color in America reach their full potential. Heartfelt and powerful, I hope this book and these stories make people realize that we can all make a difference even in the face of overwhelming odds.


Read Vinegar Hill Press’s description of Tales Of A Jailhouse Librarian: Challenging The Juvenile Justice System One Book At A Time.