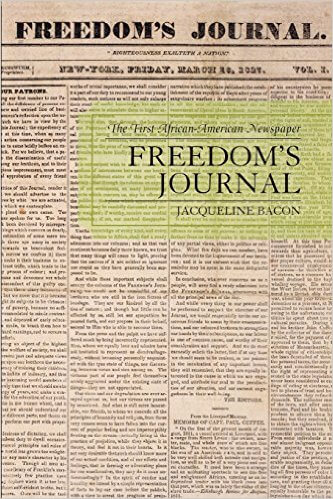 Read a Description of Freedom’s Journal: The First African-American Newspaper

“While the Constitution declares that all men are born free and equal, the wise corporation of the city of Washington see proper to proscribe the rights of a certain portion of the community Ought such laws to exist? Ought Congress to allow Washington, the spot which alone of all others should be sacred to the rights of man to be polluted by the footsteps of a slave?

Many who there plead for the equal rights of man, are the very men who buy and sell their brethren like beasts of burden.”
—Excerpted from an 1827 editorial by John B. Russwurm (page 88)

Freedom”s Journal, the first African-American newspaper ever published in the United States, debuted on March 16, 1827. The short-lived periodical was the brainchild of two black men, Samuel E. Cornish and John B. Russwurm. The former was a Presbyterian minister who had been born free in Delaware, while the latter was a mulatto, the college-educated son of a white Jamaican plantation owner and one of his servants.

Although the pair printed the paper in New York City, their ambitious mission, as stated in the inaugural edition, was to reach the ’five hundred thousand free people of color’ spread across the country. And while Freedom's Journal would fall far short of that goal and fold in 1829, it nevertheless must be credited with making a seminal contribution to the abolitionist movement by kick starting a dialogue about the evils of slavery which would survive its unfortunate demise.

Cornish and Russwurm were visionaries who penned some surprisingly insightful editorials, given that they were writing early in the 19th Century. While it cannot be definitively stated exactly why they created the paper, conventional wisdom, in part disputed here, stipulates that they were initially motivated to counter the daily diatribes of Mordecai Noah, owner of several tabloids, including the New York Enquirer.

They castigated Noah, a Jew who had taken to pumping out hateful pro-slavery propaganda, for pandering to racists in a way which was placing black folks in a very vulnerable state. In this representative op-ed, Cornish and Russwurm made a futile attempt to appeal to him as a member of an ethnic group which had suffered its share of discrimination:

“We should think, if Major Noah were a man of reflection, he would be the last to aggravate the wrongs of the oppressed. Has he forgotten that this is the only country in which the descendants of Abraham sustain a standing equal to that of the African? We should expect him to sympathize with the oppressed of every hue.”

Thanks to Dr. Jacqueline Bacon, we now have an in-depth, scholarly analysis of the first African-American paper which establishes that there was no monolithic black mindset, but rather often competing attitudes about such prevailing, hot-button subjects as the back to Africa movement versus assimilation in the U.S., and gradualism and accommodation versus violent insurrection as the answer to enslavement.

The author, who has a Ph.D. in English from the University of Texas at Austin, is a syndicated journalist whose other progressive, thought-provoking books and articles have covered a cornucopia of topics ranging from reparations to rhetoric to religion. With the fairly exhaustive and painstakingly-researched Freedom's Journal, she proves herself a gifted historian, for this engaging tome is an invaluable teaching tool for the ages, touching on more themes than can be satisfactorily addressed in this space.

don’t be surprised to get goose bumps or to be moved to tears periodically while revisiting the dawn of the black press, since many of the issues so eloquently and bravely addressed by ancestors Cornish and Russwurm way back when remain the cornerstone of concerns of vital interest to the African-American community today.