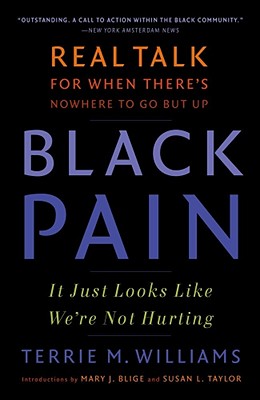 Read a Description of Black Pain: It Just Looks Like We’re Not Hurting

"How much does suffering from and living with addiction, incarceration, dirty neighborhoods, HIV, hypertension, violence, racism, and class discrimination make us vulnerable to depression in the Black community? How many of us are suffering from it and not able or willing to acknowledge it? Who is talking about it? What is our response? The silence is deafening.

Depression is a fact of Black life, but it doesn’t have to be a curse. And we don’t have to be ashamed to admit it. This book will speak openly about my own depression and share the experiences of other people, from celebrities to regular working folk, so that we can think in different ways about this condition and about our options as Black people for dealing with it. More than anything, I want to open a dialogue. I want to give a voice to our pain and name it so we can make a space for our healing."
—Excerpted from the Introduction (pages xxvi-xxvii)

African-American females are generally undervalued by this society, despite all the selfless sacrifices they routinely make at home, at work and in the community. Besides being overworked, they’re expected to behave like ever-available, accommodating sex machines or else risk being dismissed as undesirable and unfeminine.

Black men, meanwhile, have a host of their own pressures. Pigeonholed as dangerous, aggressive and angry, they have come to compensate for this stereotype by carefully cultivating a disarmingly cool, above-it-all demeanor. And, instead of developing a "language to talk about painful emotions," most adopt a super-macho mask to survive.

Apparently, neither brothers nor sisters think of themselves as entitled even to feel their emotional pain, much less address it. This is the thesis postulated by Terrie M. Williams in Black Pain: It Just Looks Like We’re Not Hurting. Ms. Williams, a licensed clinical social worker, opens her groundbreaking text with a revealing discussion of her own bottoming-out following years as a highly-functioning workaholic plunged deeply in denial about her depression. The author subsequently supplements that very personal story with empathetic illustrations of additional case histories of what she argues amounts to an unspoken epidemic currently raging in black America.

By book’s end, Ms. Williams is most persuasive, and achieves her basic aim, namely, to acknowledge that life is hard in the ’hood, that people are suffering from depression as a consequence, and that the time has arrived to remove the stigma in the community still attached to seeking out psychological help. A convincing call for African-Americana to trade in a harmful cultural stoicism for some overdue mental health treatment.

Read Scribner’s description of Black Pain: It Just Looks Like We’re Not Hurting.