Book Review: Thru My Eyes: Thoughts on Tupac Amaru Shakur in Pictures and Words 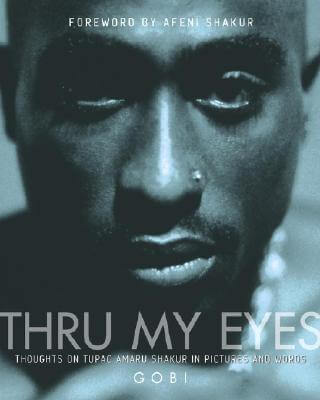 Read a Description of Thru My Eyes: Thoughts on Tupac Amaru Shakur in Pictures and Words

’Growing up in Iran, I had often heard of dervishes, people who possess a dynamic, heightened sense of awareness. Much like the shaman or the prophet, these beings are not always accepted by their society or tribe yet often act as powerful forces in shaping it. Tupac possessed such qualities. His artistic contributions to music, film, and poetry are unparalleled.

During his short life and time since his death, the media has focused solely on aspects of his character that feed into black stereotypes. What has been neglected, however, is that Tupac was a very sensitive young man deeply affected by the suffering of oppressed people. Tupac was an important person not only to African American culture but also to world culture.’
’Excerpted from Preface

When a pop star passes away prematurely, he or she is often elevated to an iconic status bordering on sainthood. This is the case with the late gangsta’ rapper Tupac Shakur, who has earned such adoration since becoming a victim of the East Coast-West Coast turf war at the tender age of 25.

Despite, or perhaps because of a long rap sheet which included felony convictions for sexual assault and gun possession, he has been the beneficiary of an enduring street credibility which continues to resonate with members of the Hip-Hop Generation.

Considered by many some to be the African-American equivalent of Elvis Presley because so many truly believe that he is still alive, Tupac serves as an inspiration to the faithful following he frequently referred to as ’Thugs.’ This is the demographic most likely to appreciate Thru My Eyes:

Thoughts on Tupac Amaru Shakur in Pictures and Words.

The book is essentially a hardcover fanzine featuring over 100 never before published pictures interspersed with sparse reflections, plus a one-page note from his mom, Afeni Shakur. The rest of the text and all the photographs come courtesy of Gobi, a director of music videos best known for his work with Tupac, Snoop Dogg, Ice Cube and Mack-10, and for his Fortune 500 commercials for companies like Gateway.

Heavy on candid snapshots and superficial in terms of its reflections, Thru My Eyes offers an opportunity for those so-inclined to see their idol during downtime in the days shortly before his demise. Whether mugging shirtless for the camera or posing with scantily-clad video hos, Tupac always seems to have a death grip on a ubiquitous cigarette. Who knows whether Philip Morris underwrote this project, but it certainly looks like an extended ad for lethal lung rockets.

The vapid verbiage accompanying the photos is, unfortunately, utterly without substance. A few ’TRUE’ samples ought to convince the curious.

’Tupac was a TRUE perfectionist. He enjoyed things of superior quality.’

Obviously, then, Thru My Eyes is not recommended for anyone expecting to find profound insights about its subject. Think professionally-bound photo album.

Read Atria Books’s description of Thru My Eyes: Thoughts on Tupac Amaru Shakur in Pictures and Words.