Book Review: Cosbyology: Essays and Observations From the Doctor of Comedy 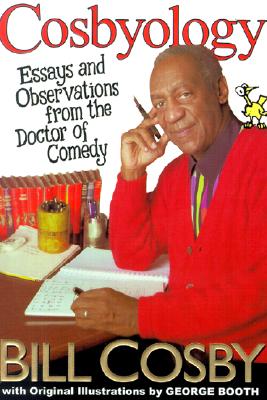 Read a Description of Cosbyology: Essays and Observations From the Doctor of Comedy

Many people regard Bill Cosby as the penultimate father figure of the 80s, replacing Robert Young of "Father Knows Best." Cosby is probably best known for the hit television program, "The Cosby Show", but many folks forget that this accomplished entertainer has his roots in standup comedy. Cos was a mentor for contemporary comedians like Sinbad [and Eddie Murphy. He was known for his ability to tell stories and for his hilarious but wholesome act. Cos returns to his roots with Cosbyology: Essays and Observations from the Doctor of Comedy, a brief, easy-to-read and very funny book.

The nineteen chapters of Cosbyology, similar to his standup routine, cover a wide range of life experiences that all folks regardless of race or ethnicity can identify with, including: grandparents, eating pork, school days, Cosby's early days in comedy, "The Lone Ranger", marriage, school, sports, and work. Readers can get a sense of the book's attitude by scanning chapter titles such as "Why I Don't Like Melting Snow Going Down the Crack of My Back" and the self-explanatory "Ingrown Hair."

Although I admire his humor, Cos' comedy for me was never sidesplittingly funny. It was more observational, like Andy Rooney of "60 Minutes" in that "Did you ever notice how...(fill in here)?" kind of way. We can all relate to and see the humor; but it usually produces steady chuckles instead of uproarious laughter. If you are a fan of the old school Cosby humor from the early comedy albums and the Fat Albert children's work, Cosbyology will hit the spot. It almost goes without saying that neither Cosby nor his book will be featured on the Black Comedy competition or in "Def Comedy Jam" any time soon.

In the chapter entitled "Don't Ever Do Your Brother a Favor" Cosby recounts trying to figure out how his mother knew a secret that he had shared only with his brother:

"'A little bird told me.' She said. I tried to figure out how a bird could possibly care about what I was doing and then go and tell my mother. The next day I went out and I looked up in the air. Sure enough, they were up there flying around ready to squeal. I became paranoid. Anytime I see a bird, even today, they can't fool me. I know their job. But those are the kind of strange things parents lay on you. Little images like that. A little bird told me."

If you want more unadulterated Cosby and the reruns from Nick at Night aren't enough for you, check out, Cosbyology. It's short, but pure Cos.

Is Bill Cosby Right?: Or Has the Black Middle Class Lost Its Mind?
Review #1 by Paige Turner,
Review #2 by Kam Williams

Read Hyperion’s description of Cosbyology: Essays and Observations From the Doctor of Comedy.