Book Review: In The Words Of Nelson Mandela 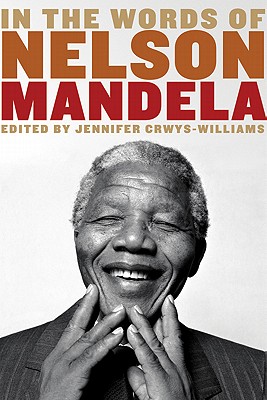 Read a Description of In The Words Of Nelson Mandela

One of the greatest assignments of my career as a newspaper reporter was covering South African leader, Nelson Mandela, who had just been released in 1990 from that country's maximum security prison, Robben Island after 27 years in prison in his New York visit. So I've been waiting patiently for the new collection of his quotes, In The Words Of Nelson Mandela. He represented all of the greatest qualities of leadership, a true sense of wisdom, strength, compassion, and a moral vision. I read his autobiography, Long Walk To Freedom, published in 1995, and rejoiced when he worked to heal the country from the bitter wounds of racial strife.

There have been many books published about Mr. Mandela and his achievements, both political and personal. Now Jennifer Crwys-Williams, a noted South African writer and media personality, has collected a generous sampling of the retired leader's opinions and observations. The words have been gathered from many sources, articles, speeches, writings, and interviews.

Here are some samples:

On Africa:
"Can we continue to tolerate our ancestors being shown as people locked in time?"

On change:
"Belief in the possibility of change and renewal is perhaps one of the defining characteristics of politics and of religion."

On children:
"The true character of a society is revealed in how it treats its children."

On freedom:
"To be free is not merely to cast off one's chains, but to live in a way that respects and enhances the lives of others."

If you want to know history, read Mr. Mandela's wise, witty, candid quotations. Never will you find them lacking in depth or rude or spoken in haste. This leader is indeed one of the world's living treasures and this collection will surely inspire and delight you. 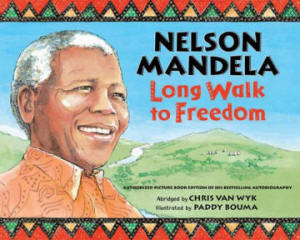 Nelson Mandela's autobiography, LONG WALK TO FREEDOM, offers a glimpse into the mind of a great leader, admired across the globe for his dedication to the struggles against apartheid in South Africa. Now the youngest readers can discover the remarkable story of Mandela's long walk from ordinary village boy, to his dynamic leadership of the African National Congress, to his many long years in prison-and, at last, his freedom and astonishing rise to become the leader of his country.

Read Candlewick Press’s description of In The Words Of Nelson Mandela.