Book Review: Raceball: How The Major Leagues Colonized The Black And Latin Game 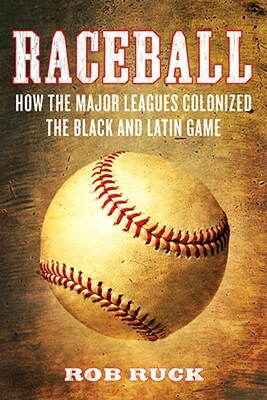 Read a Description of Raceball: How The Major Leagues Colonized The Black And Latin Game

As a life-long baseball fan, I�m always on the look-out for meaningful books on the sport with its past that so closely mirrors the social and political chronicle of America. I found it.

Rob Ruck, a professor at the University of Pittsburgh and the author of The Tropic of Baseball: Baseball in the Dominican Republic, provides the bitter truth of professional baseball in his new book, along with its racist history and the commercial greed generated by the demise of the glorious Negro Leagues and the recent Hispanic players coming in the Big Show.

Very few books have ever explored the Caribbean heritage of our national pastime like Ruck’s book. With great detail and excellent anecdotes, he traces the time line back to the late 1880s, discussing the birth of the sport in Cuba, Dominican Republic, and other Latin countries. When Ruck talks about the link between the superstars of the Negro baseball leagues and their Caribbean peers in the 1940s, he mentions the fans below the border warmly welcoming players such as Josh Gibson and Satchel Paige.

The harsh Jim Crow laws made life hell for Negro or Latin player playing in white America because of second-rate accommodations, inferior equipment, shoddy ball fields and outright harassment and insults. Most of these athletes steered clear of trying to break the color barrier until World War II finished and the money men saw "the colored players" could be a commercial boon to the established leagues. Enter the pioneer Jackie Robinson and his stellar achievement through hate and back.

However, Ruck notes that progress always has its drawbacks: "While baseball’s integration meant that African American and Latino athletes could finally join the team, and helped the United States embrace the movement to desegregate its core institutions, it came with little consideration for its impact on those whose needs should have been foremost. As a result, baseball’s integration was predatory as well as salutary. It cost black America a piece of its soul plus a crucial part of its social cohesion and economic sustenance."

In his closing chapters, Ruck writes of the rise of baseball academies in Latin countries, the decline of big league black baseball players in recent years, and the occasional surge of white racism in the sport in current times.  The success of his observations lies in that there are facts and figures behind every one of them. That makes his book exceptional. Raceball, an expose of sorts on major league baseball, gets down to some serious business without posturing or grandstanding.

Read Beacon Press’s description of Raceball: How The Major Leagues Colonized The Black And Latin Game.