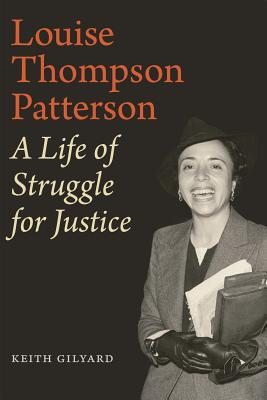 Read a Description of Louise Thompson Patterson: A Life of Struggle for Justice

To study her story is to witness the courage, sacrifice, vision and discipline of someone who spent decades working to achieve justice and liberation for all people (Gilyard 5).”

Part of Gilyard’s goal in writing Louise Thomas Patterson, A Life of Struggle for Justice (Duke University Press, 2017), are in his words “…getting some of the major facts straight and illustrating her formidable activism (3).” To accomplish this, Gilyard spent years reading her unpublished memoir, unpublished materials, published articles, and FBI records; listening to audiotapes and videotapes; and interviewing many people. What emerges is a rich biography that provides detailed descriptions of key components of Patterson’s activist life.

As a young very fair-skinned child Patterson experienced incidents of racism and isolation in various states in the West: Nevada, Utah, Idaho, and Oregon and grew up with a sense of rebellion and isolation. She also confronted conflicted racial and class attitudes while in high school in Sacramento. By the time she graduated from high school she understood loneliness, poverty, patriarchy and racial discrimination. She came face to face with Jim Crow racism and the exploitation of the southern sharecropping system when she took a job at Pine Bluff Agricultural, Mechanical and Normal School in Arkansas. One could say that the seeds for her life of socialist radicalism were fertilized and dispersed in the West and became full-blown in Arkansas. Upon taking a job, Patterson began to participate in radical movements and projects and to fight against the waves of Jim Crow.

An advocate and organizer, she was involved in labor unions as well as the Communist Party and survived the McCarthy era and the anti- Paul Robeson hysteria. She viewed political socialism as a way to eradicating poverty, racism and sexism and played a crucial role in the Direct Action Campaign for the Scottsboro Nine Direct Action Black males who were falsely accused of rape and in the efforts to free political prisoner Angela Davis. She organized a trip for a group of writers and activists to Russia, was a political worker during the Harlem Renaissance.

Gilyard’s expertise in biography comes into play in this book. As in his book, John Oliver Killens: A Life of Black Activism, the strength of this biography lays in Gilyard’s examination of the emotional and personal life his subject. As readers we come to understand why Louise Thomas Patterson became so passionate about her life’s work and we are drawn to her as she moves from project to project, tirelessly, not stopping even as her health began to fail. During her late years she continued to be mindful of a wide array of issues beginning with health care, affirmative action, sanctions against apartheid, racial discrimination in the banks and police force and Operation Desert Storm. Gilyard closes the book with a quote that Patterson gave to the filmmaker Louis Massiah. “What I would like to leave you is a feeling that whatever small contribution I have made has not been a sacrifice – it has been a pleasure… (229).” This is a must read for anyone who wants to understand the struggles endured by our activist leaders.