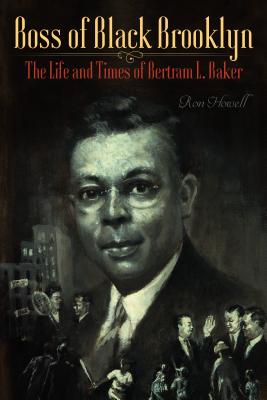 Read a Description of Boss of Black Brooklyn: The Life and Times of Bertram L. Baker

Bertram Baker was a man of his times… Like Du Bois, Bertram believed in agitating to achieve political advantages for black people. Like Washington, Bertram liked to form cliques of associates who looked out for one another (Howell 48).”

Ron Howell’s comprehensive biography of his grandfather, Boss of Black Brooklyn: The Life and Times of Bertram Baker (Fordham U. Press, Oct 2, 2018) is a labor of love and a testament to the legacy of a man whom Howell came to respect deeply. The late Bertram Baker was born in St. Nevis in 1898 and immigrated to the United States in 1915. He died of cancer in 1985. Howell’s quotation comparing him to both Booker T. Washington and W.E.B. DuBois speaks to the essence of the man, the “Boss of Black Brooklyn.” He was viewed as the consummate compromiser and a believer in the concept of the talented tenth. The chapters “The American Tennis Association as Brotherhood/Sisterhood” and “Master of Black Compromise” in the biography embody the symbolism of Baker’s commitment to the philosophies espoused by Washington and DuBois. Baker, for example, believed in forming Black associations of the “talented tenth” as he did when he formed the Utopian Club, the largest of the local clubs in the nationwide network making up the American Tennis Association. His incarnation of Washington was memorialized in a campaign speech where he referred to Washington’s theme of “cast down your bucket where you are.”

Howell explores the politics of Black Brooklyn from the 1930s to the late 1960s and provides the reader with an insider’s knowledge of the personal triumphs and challenges of a man determined to make a difference in Brooklyn. Respected by both black and white leaders, Bertram embraced the Democratic Party when many Blacks feared and resented it. Haunted by memories of the rise of the Democratic Party after Reconstruction and through the Jim Crow south, African American Blacks wanted no part of a party that was home to groups such as the Ku Klux Khan (KKK). As a Caribbean who immigrated to America, Baker had a different perspective on the Democratic Party. He looked towards those who held the seat of power in Brooklyn.

Baker was the first Black man to hold public office in Brooklyn and was elected to the New York State Assembly in 1948 where he stayed until 1970, retiring after 22 years. While in office he pushed through the Metcalf/Baker bill, one of the first bills outlawing discrimination in housing. He also chaired the Education Committee and because of his commitment to integration in the public school system, he led the efforts in locking up a bill that would stop Black children from being bused to schools to achieve racial integration. Despite these successes, by the end of the 1960s Baker was viewed as a reactionary against Black Brooklyn politics by the emerging Black political leaders.

Howell writes about the impact of Caribbean/African American relationships, racial and ethnic politics, immigration, the back stories on appointments of judges and government leaders, and the “strange alliances” that form and dismantle as politicians interact in the community, civic and political organizations of Brooklyn. His book brings to mind The Peacock Elite: A Case Study of the Congressional Black Caucus (Grant House Publishers, March 2011) by the late Congressman Major Owens. Like Howell, Owens who was a member of the Black Caucus (CBC) for 24 years, provides the reader with an insider’s perspective of the dynamics, highlights and challenges of the CBC.