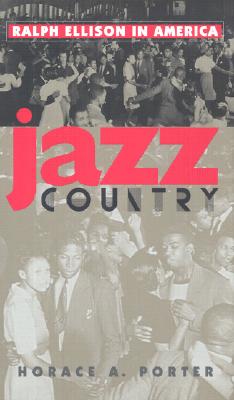 by Horace A. Porter

Read a Description of Jazz Country: Ralph Ellison in America

Studying the writings of writer-intellectual Ralph Ellison, author of the critically acclaimed novel, Invisible Man promises to be rewarding. Horace Porter has produced such a study in Jazz Country: Ralph Ellison in America. Taking for his premise, Ellison's view of American culture as Jazz-shaped, Horace Porter provides and intriguing portrait of one Americas greatest writers. Ellison sums up his view with this definition, Jazz, like the country which gave it birth, is fecund in its inventiveness, swift and traumatic in its developments…art which demands great physical stamina of its practitioners, and many of its most talented creators die young.

The Books cultural study aspects are informative and the use of numerous notes gives this small work added density. Part literary criticism, part biography, the books reference notes facilitates further study of Ellison's work, along with Jazz and African-American works. Additionally, along side the books focus lays a treasure for the reader. Ellison's essays and novels have been influenced by many Jazz musicians, reading like a Who's Who of Jazz and early musical traditions, Mahalia Jackson, Duke Ellington, Louis Armstrong, Charlie Parker and others round out the list. Whether intentional or coincidental, the Jazz personalities come across as vivid characters stealing the show in the first two chapters of the book.

Ralph Ellison not only wrote about the Jazz aesthetic but also incorporated Jazz techniques into his novels, Invisible Man and Juneteenth. Horace Porter takes a fresh approach when writing about Invisible Man, focusing on the novel as an example of American culture and the Harlem riot scene. Porters critique of Invisible Man pinpoints examples of Jazz techniques used by Ellison that a cursory reading of the novel would not reveal. Porter further points out that Invisible Man is book of sounds and signifying by quoting Henry Louis Gates Jr., who calls Invisible Man a talking book that helped to establish a collective black voice…thereby to register a black presence in letters.

According to the book jacket, Jazz country is the first book published to assess Ralph Ellison's second novel, Juneteenth. The assessment is excellent covering the next to the last two chapters of the book. Again, the focus narrows concentrating on Ellison's character Rev. Hickman, former Jazzman turned evangelist. Pulling examples from the writing of T.S. Eliot and the preaching of Rev. C.L. Franklin, two individuals that are worlds apart, Porter shows how Ellison manages to blend these examples successfully into his Rev. Hickman character.

Ellison's early influences as a writer to include James Joyce and Ernest Hemingway to name a few are explored in latter part of Jazz Country. Ellison drew criticism for his views and ideas, but always the consummate artist, Ellison never compromised. As a fitting and insightful conclusion to the creative inspirations of Ralph Ellison, Larry Neal writes, Ellison finds the aesthetic all around him…in preachers, blues singers, hustlers, gamblers, Jazzmen, boxers, dancers and itinerant storytellers. He pulls the covers off the stereotypes…to probe beneath the surface where the hard-core mythic truth lies, understanding this about Ellison clarifies his work and underscores the premise of Jazz Country: Ralph Ellison in America.

Read To Be Determined’s description of Jazz Country: Ralph Ellison in America.