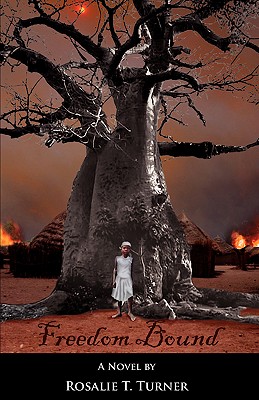 Read a Description of Freedom Bound

The novel Freedom bound is based on the life Anta Majigeen Ndiaya who had been captured by slave raiders from Yang Yang village in Senegal, West Africa. Author Rosalie Turner uses the true-life story of an African princess, slave, mistress, mother, landowner, businesswoman and slaveholder to tackle many complex issues, the first being the ever sensitive subject of the ’peculiar institution’ of enslavement in America. With a flair for history and an eye for detail Turner takes the shell of Anna Kingsley's life and fills it in with fictional, yet believable accounts.

The book details how a young Anta later named Anna had been captured during a night raid on her village, witnessed her parents' death and was chained and marched with other captives to the coast to be stored at Goree Island before making the middle passage.

While Turner graphically depicts many aspects of enslavement, her focus tended more to a ’lighter’ version of accounts of human captivity. For instance on the ship, The Sally, female captives were allowed to roam the deck freely while men remained chained and in the lower hold. And once on the Kingsley Plantation, slaves were treated leniently being allowed to marry and keep their families intact. Harsh whippings were rare and Zephaniah Kingsley allowed his slaves the opportunity to purchase their own freedom either through years of service or with wages from crops they had grown.

Other aspects of the novel deals with the strength of friendship with the lasting and endearing bond between Anna and Bella who acted as her mother figure for Anna during the middle passage and her dear friend Sophie with whom she shared troubled and good times of their lives. There is also the example of how the ability of love and understanding can reverse or soften the impact of something horrid like enslavement and rape.

But the essence of the book speaks to concept of freedom and whether or not any the book's characters can ever grasp true freedom. For much of the novel Anna longs to be free, but never seemed to be satisfied with her life despite her status as mistress to Zephaniah Kingsley. Anna often noted that no matter how well Master Kingsley treated her and no matter what privileges she obtained, she could do nothing without her master's permission and knowledge. She laments this Abraham, overseer and fellow slave, when she talks of her hope of receiving manumission papers as she prepares to give birth to Kingsely's first child. But she even asks herself looking away from Abraham, ’Where will I go? What will I do?’ She knew she wanted to be free, but had no clear answers.

As Anna longs her freedom, other characters of the book struggle with the subject as well. Zephaniah Kingsley for instance is bound by the impending danger of battle threatening his livelihood and other plantations. At the time the Spanish American war was in full swing with the Civil War not too far behind. Kingsley fears he may have to leave his many plantations behind and move to Haiti for safety. Is he, slave master, plantation owner, businessman even free?

But throughout the novel the question goes begging, what makes Anna so special? Clearly she is a strong character, a young woman of grace and courage who knew what she wanted and knew who she was. She knew her worth. During the middle passage Anna was chided by Bella that all she had was her spirit and herself. She also told Anna that she was strong and would live and have the opportunity to create her own life despite their terrible circumstances.

Anna often spoke of being a princess in Africa of royal lineage. Despite that lineage Anna remained in peril. Unfortunately, despite many recollections of Anna to her life in Senegal as a child, the hierarchical nature of her royalty in Yang Yang Village is not discussed at length and it may have added greater detail to the story.

But the mystery of Anna's strength may be revealed the acacia tree. As Anta's village was being raided, she sought safety and shelter from a baobab tree in her village, until a bandit swept her up and rode her away on horseback. But as she was marched to the coast chained with other captives, it was the salve of the acacia tree she longed for to soothe her wounds on her legs and feet. In her new life her children, ever curious about their mother's life in Africa, would ask her repeatedly to tell them the story of the acacia tree. She tells her children that God had made the acacia tree one of the most beautiful trees of all, but He knew that the devil had seen the tree and started to make plans to destroy it. The acacia originally had beautiful sweeping leaves and provided much shade, but in order to protect it from the devil, God turned the tree upside down to reveal the roots of the tree at the top and the vast greenery at the bottom. And perhaps that is what made Anna who she was, the strong connection to her roots, which had shown above everything else in her character and in her life.

Overall Freedom Bound is a wonderful read. Anna Kingsley is a fascinating character who has certainly made her mark in history.

Read To Be Determined’s description of Freedom Bound.