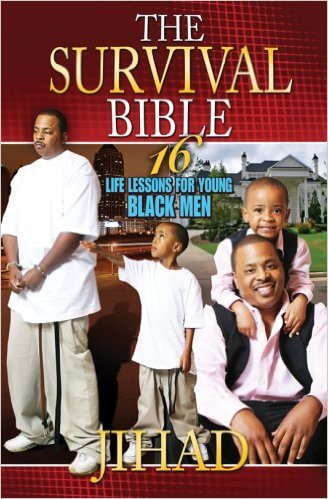 Read a Description of The Survival Bible

’On April 13th, 1999, I was released from federal prison after serving 7 years for being ignorant. Yeah, I was a dope dealer’ For 22 years, I was a rebel without a cause. Nobody could tell me anything as I went through women, sold drugs, and committed all kinds of negative acts to people who looked like me’all for the almighty dollar, and a few seconds of fame’
For so long, I robbed, stole, and sold drugs. For so long, I was filled with self-hate and didn't even know it, until I discovered who I was, thanks to some of the most intelligent men who’ will never see the light of day from behind America's penitentiary walls.

I make no excuse for the wrong I did. It is my hope that this book will help at least one misguided young man’ In the pages of this book are true to life essays that I hope will educate and inspire our young black men to aspire to be the Kings they were destined to be.’
’Excerpted from the Introduction (pages 3-8)

The road to manhood for most African-American boys is a perilous path paved with potholes with the specter of prison looming for any misstep. For the criminal justice system has a history of doling out far harsher treatment to black males than whites. Consequently, half of the 2 million inmates currently behind bars are black.

Complicating the picture is the fact that approximately 80% of African-American children are now raised by single mothers. This means that most black boys grow up without a male role model around. Thus, it's really no surprise that formative years spent under the spell of gangsta’ rap videos might encourage them to hang out on the streets and to participate in a host of misogynistic, anti-social and illegal behaviors likely to mire them in a neverending cycle of dysfunction, if not land them in a penitentiary.

For this reason, Elbert Lee Frazier, Jr., aka Jihad, decided to write The Survival Bible: 16 Life Lessons for Young Black Men. You see, he speaks from experience, since he himself was raised by a single-mom and ended up a troubled youngster who served a long prison sentence. The basic aim of his practical how-to book is to help impressionable young minds avoid making the same mistakes.

So, for example, he discourages wearing saggy, baggy pants because most ’lil homies' are unaware that this is an advertisement to homosexuals that they are submissive, so-called ’catchers.’ And with AIDS so rampant in the black community, the last thing a straight kid probably wants is to be unwittingly flirting with a desperate, HIV+ recently-paroled predator on the down-low.

In a chapter entitled ’What Up, Dog?’ Jihad suggests that black people stop referring to each other by ethic slurs or by terms reserved for animals, like ’bitch’ and ’dog.’ He points out that this practice is a self-hating holdover from slavery when whites used such derogatory epithets to separate Africans from their families, culture, history and traditions.

Written in a down-to-earth style that the average adolescent can understand, The Survival Bible is chock full of sensible advice about everything from STDs to teen pregnancy to drug use to snitching to the importance of getting a good education. A sobering lesson from a successful graduate of the school of overwhelming regret with a tough love message amounting to, ’do as I say, not as I did.’