Book Review: As If Nothing Happened 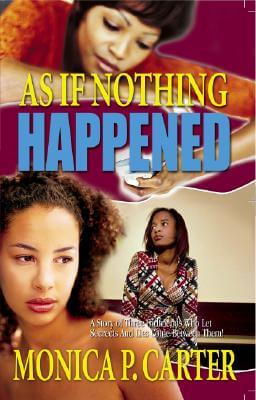 Read a Description of As If Nothing Happened

"And in the nine years she had known Joya, since freshman year, and in the eight years they had known Yvonne, the three had never become distant. Even though, Jennifer had to admit, guiltily, there had been plenty of times when her friends should have kicked her aside because of her mouth. But they didn't. She wondered what she would do without them." - from As If Nothing Happened.

As If Nothing Happened marks the literary debut of Monica Carter. It is a story of friendships, relationships, and the costs of keeping secrets.

Joya, Yvonne and Jennifer have been friends for many years. Joya is a financial planner who has worked herself out of poverty into a life of material stability, though she yearns for the completion of love. Yvonne is a dancer with dreams of making it big, but is constantly in danger of being derailed by her poor choices in men. Jennifer is married with a beautiful daughter and thinks that her life is better than those of her friends until her seemingly drama-free home life is threatened. The women usually turn to each other when times get rough, but events in their respective lives seem to prove too large for even their strong friendship to endure.

Monica Carter displays a crisp, realistic dialogue that flows throughout the story. Indeed, the conversations are as familiar and comfortable as if one were sitting down and listening to members of a family gathering. Each woman's life-changing event is laid out from that woman's point of view in a clear and non-confusing fashion. Unfortunately, the beauty of this gift of dialogue is almost lost in the thin and predictable plot of the story.

While this story can be argued as being true-to-life, the triteness of the storyline leaves much to be desired. Readers may be able to figure out the ending of the story within the first chapter of the book, an ending that left no loose ends. Such endings are usually reserved for romances and may leave readers disappointed. If As If Nothing Happened had challenged the reader a bit more, it might have been more enjoyable and satisfying, instead of eliciting the complacent "ho-hum" responses similar to the other cookie-cutter novels that grace this nation's bookshelves.

Many readers will have encountered these characters before in some fashion, whether through societal stereotypes, or from reading other works, or viewing movies. There is the financially successful woman who has everything she wants/needs except a man, being that most men don't measure up to her standards. There is the pretty woman who is not that intelligent yet has a heart of gold -- a heart that is constantly being bruised by her dalliances with "wrong" men, who spout pretty words in order to fulfill their pleasure-seeking. Lastly there is the superwoman who works full-time, takes care of the children and home, and constantly cuts her man down by telling him exactly what he is not doing for her and that she can do it all by herself. The male characters bring more of the same, prominently featured in the roles of the "Player," the "Nice Guy," and the "Lecherous (White) Boss". While the author attempts to add depth to these clich’s, the characters still manage to come off as flat and two-dimensional.

As If Nothing Happened seems to ultimately be more about Joya and how she wrestles with her personal demons in response to her relationships with Yvonne and Jennifer, but it is nonetheless an interesting read. The story, though it has been told in many other versions and ways, is still entertaining and will compel the reader to keep going until the end. Readers should look forward to seeing Ms. Carter's future works.

Read Rootsky Publishing’s description of As If Nothing Happened.