Book Review: Grandpa! Tell Us a Story Drinking from Ancient Wells the Story of the Game Black People Play/Trilogy Book One: The Game’s Soul 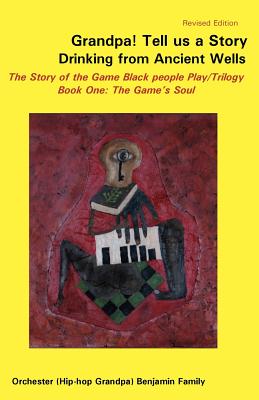 Read a Description of Grandpa! Tell Us a Story Drinking from Ancient Wells the Story of the Game Black People Play/Trilogy Book One: The Game’s Soul

Read an Excerpt from Grandpa! Tell Us a Story Drinking from Ancient Wells the Story of the Game Black People Play/Trilogy Book One: The Game’s Soul

He began taking the shells out of the gun and sighting down the barrel, and pulled the trigger listening to the click. All the while he was pointing the gun in my general direction, finally he pointed it straight at me, pulled the trigger, said bang real loud, and I almost jumped out of the chair. He loaded the gun, still pointed in my direction, and began talking to his woman while looking me straight in the eyes.

’Baby, have you ever heard the expression, if you find a fool, bump his head.’

’Yeah Daddy Sweet, I heard that the bigger the fool the harder his head has to be bumped.’

’Well if somebody gave a loaded gun to a complete stranger, talking about selling it, how big of a fool is that?’

’That would be the biggest fool I ever heard about in all of my life. His head should be bump real hard.’

Though the excerpt above may sound like something out of the movies, it is a portion of one man’s true story. The man is Orchester Benjamin, and he is the one who is learning the ways of the street the hard way with a gun pointed at his head. Many years prior, his grandchildren always had a request of him: ’Grandpa! Tell us a story.’ Instead of sitting them down and telling them the same old nursery rhymes or Dr. Seuss tales, he asked them to be patient while he gathered his thoughts. Many years and words later, his memoir ’Grandpa! Tell us a story; Drinking From Ancient Wells’ was born.

Orchester’s story is no everyday life story either. Keeping in mind his humble beginnings in Louisiana where he learned valuable life lessons from his parents and his maternal and paternal grandfathers, he tells an intriguing tale of learned values and humility. As he grew older, he wanted to be a part of the popular crowd known as the Village kids (who so happened to be the ones who got in the most trouble). Even though he is guided throughout his life by his African ancestors, Priest Sowa and Priestess Mabole, it’s the influence of the Village kids and the motivation to become a street hustler later in life that sends his life down a slippery slope of cocaine dealing, addiction, and incarceration.

Grandpa! Tell us a story is an interesting memoir that fuses detailed historical facts, personal philosophy, and everyday life as a man trying to make it on the mean American streets, including Los Angeles, Oakland, Oklahoma City, and more. Rather if you're reading about his naivety of trying to sell a loaded gun, trying to understand his arguments with a preacher about God’s purpose for us, or absorbing his take on the history of the Ku Klux Klan, Frederick Douglas, and slavery, you will not be bored. It’s easy to tell that this former Black Panther writes like he speaks like when he tells us he is getting ahead of himself in the text, when he shares how being whipped by his mother only made him slicker, and when he is honest about never finishing school. The book could use an editor’s touch. It could also use actual chapters so that it doesn't read like one long speech. And you may have a few what-the-heck moments as his African ancestors appear to him throughout the book (especially since this is non-fiction). But the 73-year-old Benjamin did accomplish his goal of telling his grandchildren (and us) an out of-the-ordinary story that can be handed down to generations in his family and ours.

Read SoulViewWorld’s description of Grandpa! Tell Us a Story Drinking from Ancient Wells the Story of the Game Black People Play/Trilogy Book One: The Game’s Soul.