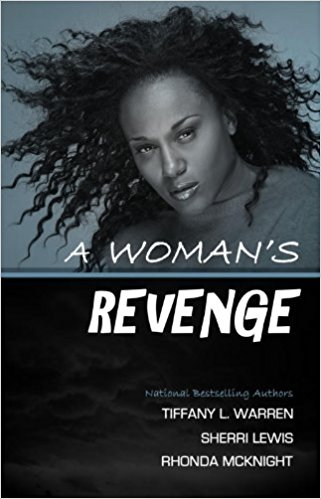 Read a Description of A Woman’s Revenge

Just looking at the cover of this book, I wasn't sure if it was really Christian fiction. This anthology of three stories written by three best-selling Christian authors is certainly edgy and a delicious surprise. Having read the works of these three authors in the past; I was anxious to see what they were working with in this recent compilation. I really loved these stories.

A Slim Chance by Tiffany Warren is the story of Nadine Robinson, a plus-sized church girl who everyone loves. Her church work blesses so many and she is at the top of her game professionally but she is convinced that her 300 pound body has prevented her from a relationship with the only man that she has ever loved. So she leaves her Georgia home and hides away in a weight-loss clinic in Colorado for gastric bypass surgery. Returning a year later; half her former size hoping to surprise her secret lover. However; the surprise is on her when she finds him engaged to marry her best friend, Angelique.

Joining forces with her unchurched younger sister, sweet spirited Nadine becomes Satan in high heels secretly plotting revenge against her former best friend. She believes that the drama they create will surely get her man back and teach Angelique a lesson. But she goes over the top in dishing out the dirt and everything backfires in her face.

In The Sweet Taste of Revenge by Sherri Lewis, Sabrina Rogers is secretly engaged to her boss, Blake Harrison. Blake is the man of her dreams who offers her the lifestyle she never could afford. She has issues with the fact that he has convinced her that their personal relationship will damage their professional image if they are found out. Yet; she is naive enough to believe that once he makes partner, they will marry and she can quit her job and become a woman of leisure. She has gotten so tied up in pleasing her playboy fiancee that she has backslid from the church and has forsaken her relationship with God. When she discovers that he has been cheating on her with more than one woman, she is heartbroken. But when she discovers that one of these women is her estranged mother; her broken heart turns to stone. Her anger turns her love for him into rage and the thirst for revenge. She teams up with her mother to ruin him professionally. Her mother has more tricks up her sleeve than a magician.

My favorite story; A Piece of Revenge by Rhonda McKnight whose protagonist, Tamera Watson finds out she is married to a con man with several different aliases. Her anger rears its ugly head when she realizes that she was set up from the very beginning. The scoundrel married her intent in robbing her blind. He runs off with both her heart and her money emptying their joint bank account of not only their personal funds, but also the grant money for the non-profit they started to help inner city kids. He has put her at risk to lose everything; including her dreams. This church girl stops crying and praying as she exchanges her wedding ring for a gun at a local pawn shop and heads out to get back everything the devil has stolen from her.

Christian fiction? Yes; with more reality than this reader could ever imagine. These stories kept me sitting on the edge of my chair, turning page after page in suspense. I was wholly entertained.

Will the God in these women bring them back to their spirituality before they cross the line? Will they accept that God is still in control of their destiny or will they let their hunger for revenge destroy the women that they used to be? Will God save them from themselves and will they learn forgiveness and be delivered from their circumstances? You'll have to read this anthology for yourself because I am not telling.

But I will tell you that you will be thoroughly drawn in by these tales of revenge. Crisp, clear writing, interesting characters and three story lines that will hold your attention from page to page makes this title a sure winner.