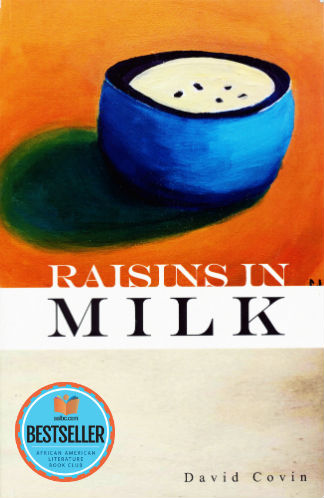 Read a Description of Raisins in Milk

Read an Excerpt from Raisins in Milk

Raisins in Milk by David Covin is a coming of age story focused on a young girl, Ruth-Ann Weathering, who is subjected to the staunch racism and stark reality of growing up in the South during the early 20th century. Beginning in the summer of 1913 and continuing through the winter of 1920, David Covin takes the reader on a journey through the seasons of Ruth-Ann Weathering’s life, her departure from Mandarin, Florida at age 13, her flight to Jacksonville, Florida, her migration to the north and her return to the south. We witness her resilience and determination to surmount the obstacles facing her.

In his preface to the novel, Covin references Toni Morrison who told him in an early version of Raisins in the Milk, that he had a good story which needed more development and more in-depth characters. Covin has followed Morrison’s recommendation. He creates characters who defy the norm, who resist although they are still subjected to the realities of living in a racist society, who are subjected to lynchings, rape, Jim Crow laws, and voter suppression, who, in short face some realities which still persist today.

The protagonist, Ruth Ann Weathering, as her name symbolizes, weathers the storms of life. She is a survivor and prevails over the challenges faced by Blacks in the South. Stephen Wenders becomes integral to Ruth’s development. Through Covin’s moving narrative, we enter the interior lives of Ruth-Ann Weathering and Stephen Wenders and become part of their journey. We understand their desires, their fears and longings and the choices they make; we enter the threshold of their lives as we witness their work place, social gatherings, and home life.

The novel is compelling and emotionally riveting. It keeps readers engaged through a fast-moving plot, short chapters and carefully crafted language. Covin heightens our senses through precise detailed descriptions. In describing Ruth-Ann’s walks through a field, he writes:

The sound, like a staccato drum-beat-an instant of nothing-then sound again, struck her with a feeling of unreality. She felt her insides turning. She kept walking, eyes straight ahead, hoping not to hear the sound again, hoping it was an accident, some trick played by the wind. But the hard, swift, separated sounds did not stop. (5)

Covin provides an historical framework for this narrative. We understand why so many Blacks from the South became part of the Great Migration, that movement of six million African Americans from the south to the urban Northeast, Midwest and West that occurred between 1916 and 1970. Covin vividly portrays this dilemma and the motivation to migrate through the character of Stephen Wenders. Wenders, in reflecting on why he cannot live in the South, states:

Some things you have to bear alone. Why can’t I live here? That’s why. Because staying here does not mean living here. They have the prerogative- even the most wretched of them – to take my life on a whim. Then what am I to Ruth-Ann, to my children… Always less than a man. (179)

Covin also reminds us of why it is important to tell our stories. We don’t often get the stories of Black families who owned land, raised their own livestock, and grew all the food they needed to survive. Families like the Wenders, who are the model of self-determination, are not in our history books.

The Wenders were lords and masters of their hundreds of acres and the stretches of the Saint Johns that flowed past them. Most white people stayed clear of their lands and river banks because they didn’t know who they were –or- what they were. There were the white Wenders and the Black Wenders. (69)

Central to this novel is the premise that we live in a society constructed by race. Ruth-Ann Weathering leaves her home at the age of 13 because of what she experiences as a young girl in the south. She understands that she will not be able to live as a Black woman with dignity. The Wenders own their land and seclude themselves from the real world but that world of the south encroaches upon them. They try but cannot escape the racism that follows them in a society constructed by race.

David Covin has mastered the art of storytelling. If you want to read a novel that presents a portrait of resilience, this is one for you. Covin takes care in capturing the dialect of his characters and in depicting the setting. However, I often found myself reaching the end of a chapter and wanting it to continue. My only recommendation is that I think that novel would have been made stronger with more fully developed chapters.

David Covin is Professor Emeritus of Government and Pan African Studies at Sacramento State University. He has written over fifty articles in in scholarly journals, as book chapters, the popular press, and as book reviews. Raisins in Milk (Blue Nile Press, 2018) is his fourth published novel, following Princes of the Road (2012), Wimbey s Corner (2011); and Brown Sky (1987).

Brenda M. Greene is Professor of English and Executive Director of the Center for Black Literature at Medgar Evers College, CUNY.