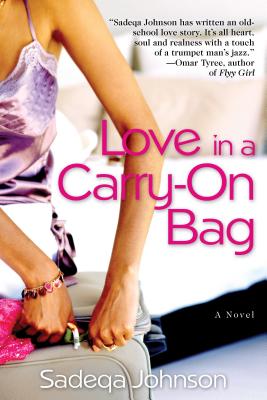 Read a Description of Love In A Carry-On Bag

As Wild As The Wind

Modern technology has made a long-distance love affair more of a reality. The characters in this novel took the concept and made it happen. This first time author, Sadeqa Johnson put it all together in a remarkably entertaining story that reminded me why I love books and the joy of reading. It is a great first effort by an author who can really write.

Love in a Carry-On Bag is about two people who need to be together. Erica Shaw is a very polished and aggressive publicist for one of the top publishing companies in New York City. Warren Prince is a sexy musician who is more interested in making music than he is in making money. Yet; the son of a career military man, he is forced to spend his days working as a software engineer in Washington, D.C. because his father insists that he make good money. They meet in New York in a smokey jazz club. His trumpet captured her soul and her smile captured his heart. They had only been dating a few months when Warren moved to D.C. to take the lucrative job that his father arranged. They had spent every weekend together for the past year running back and forth between New York and D.C., loving, laughing and waiting for just the right time to be together on a permanent basis. It was easier said than done. The distance is wearing them both down.

This is old school love. The kind of love that makes a woman long for her man and makes a man want to be captured by the game. His mother's recent death and his father's aloofness makes him very vulnerable to a nurturing woman like Erica. Her mother's alcholism and irresponsibilty and her father's abandonment all give Erica and Warren the right kind of hearts to share.

Erica is determined to work her way up the corporate ladder working hard not to be like all of the women in her family before her. Her mother, grandmother, aunts and cousins all had fallen into the pit of bad men, hard times and substance abuse. Erica was going to be different.

Warren's mother supported and encouraged his music from a ypung child, herself an accomplished pianist and lover of jazz but her death from lung cancer left him out there on his own. His father never once appreciated his talents and never supported his gifts. He taught him that real men made the hard choices in life. He didn't want his son to end up a poor, stuggling musician.

Johnson writes well. The words slide across the page and you remember them even when the pace picks up and the words start to race across the page telling a story that keeps you totally engrossed. Her storyline is well fleshed out, creating two characters with both heart and soul. You come to care about Erica and Warren from the very first chapters.

The back and forth, both him and her telling the story of their lives in alternate chapters works very well. Her settings are real. I was literally sitting inside the jazz clubs as he performed, on the dance floor with them in a local bar in D.C and eating breakfast with them in Harlem at 6 a.m. After a late club date. I really loved this book.

Their love-making is passionate. Their time together is sweet and playful. They both gave as good as they got. It is a great Black love story from way back when. No games, no pretense and none of the crazy stuff that many couples today put themselves through, just honest and pure.

However; the reality of her ambition to make it to the top of her game and his passion for his music got in the way of their relationship. The dysfunction of both of their families had left them broken in too many places. As outsiders wait in the shadows for them to fall apart, they continue to fight to stay together with all of the drama that, that entails.

I won't give away much more than that. You want to read this novel for yourself and enjoy this book as much as I did. Sadeqa Johnson is just too good to be a one-shot wonder. Her next book, Second House From The Corner is scheduled to be released soon [February 2016]. I am looking forward to reading it.