Book Review: Neglected But Undefeated: The Life Of A Boy Who Never Knew A Mother’s Love 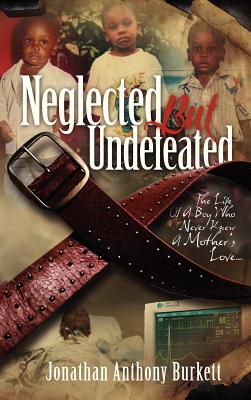 Read a Description of Neglected But Undefeated: The Life Of A Boy Who Never Knew A Mother’s Love

Born in 1987, Jonathan Anthony Burkett has lived a young life that reads like fiction: vicious beatings by his mother, a mental breakdown in elementary school, homelessness, seizures and hallucinations from a brain disorder brought on by stress and anxiety, and finally brain surgery that would either help him or kill him.

“This is a story about my life as a young man going through many struggles. ...Finding myself at the early age of fourteen, sleeping on the streets, in cars, and parks, with a broken heart and mind because of the life I was living.”

Neglected but Undefeated is a heartbreaking but ultimately hopeful memoir of a young life full of bad times. “There have been so many wrong routes that I’ve taken in my existence because of the confusion and neglect that my mother has shown, because she saw another man when she looked at me. ...I need to let it all out to be able to move toward a better life like my psychiatrist, psychologist, therapist, counselors, and the ladies in my anger management classes told me.”

Born in Florida, Burkett lived with his grandparents in Jamaica, where he had a happy childhood until he moved back to the states at six to live with his mother and “father”. That’s when his mother savagely and routinely beat him because she hated his real father, who had raped her. Burkett’s litany of his mother’s severe and constant beatings, her attacks on him with a knife, and verbal abuse are harrowing, and at times, relentless. I wanted to shake him for not defending himself until I remembered that this is a boy who only wanted his mother’s love and put up with the unimaginable trying to get it.

In 2005, alone, defeated and discouraged, Burkett prepares for brain surgery, not quite sure if he even wants to survive. He is aided by Marise, a worker at the hospital and by the knowledge that the surgery could change his life, if he survives it. When he does, and the surgery is successful he decides that—despite the trials and tribulations he had faced and would face—he’ll never give up. He turns to writing to understand his feelings about his mother, and it changes him in ways that he never expected, allowing him to forgive her and come to terms with his life.

This evocative story fully illustrates the W. Somerset Maugham quote that all writers eventually come to know, “We don’t write because we want to; we write because we have to.” Burkett’s memoir poses the questions: How do you keep going when you have nothing left? How do you find courage when you are all alone? How do you love yourself when your own mother doesn’t love you?

Though this is not the most eloquent, or well-written story, and the poems often intrude in the narrative, this does not fully diminish its impact. If you appreciate stories of survival, hope and ultimately empowerment, Neglected but Undefeated will not disappoint you. It might even give you reason to count your blessings.


Read Jonathan Anthony Burkett Publications’s description of Neglected But Undefeated: The Life Of A Boy Who Never Knew A Mother’s Love.