Book Review: How To Knock A Bravebird From Her Perch (The Morrow Girls) 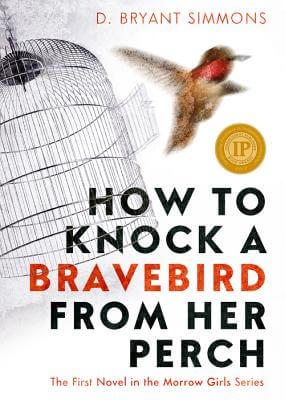 Inspired by family and friends who have been victims of abuse, D. Bryant Simmons, an advocate of female empowerment and children’s rights, wrote How To Knock A Bravebird From Her Perch to encourage victims of domestic violence and dedicated it to “all women who doubt their abilities. Especially my mother.”

After two years of marriage, Belinda “Pecan” Morrow regrets her short courtship and marrying so soon after her father’s death and before her high school graduation. She packs her belongings and her year old baby girl and leaves her husband, Ricky Morrow, the up-and-coming boxing sensation from Mississippi. When Ricky catches up with them Pecan is on the receiving end of his anger and learns that he has no qualms about using his fists on her.

“See, Ricky never had to try too hard to convince me that it was all my fault. I just knew. Me and him was my fault. Anything that happened with the kids was my fault. I knew deep in my bones that was the way it was. That I made him mad, made him hit me. I was still making him hit me by not loving him...not being a good enough mama. Maybe I just wasn’t built to be a good wife and mama. Maybe I was just like my own mama.”

He didn’t hit her every day and when he did he was deeply regretful, buying her gifts and showering her with love, care and promises. With nowhere else to go, a baby girl, no money, no job and only a high school education, Pecan decides, “to make the best of it.” She becomes pregnant shortly after, with one girl, then another, and then another. It isn’t until Ricky starts hitting their young daughters that Pecan finally breaks. “That’s when our truce came to an end. Me and Ricky’s. Five years of peace gone. It scared me but not like before. Maybe because he looked at me like he ain’t know me. Like I wasn’t the same seventeen-year-old girl he’d married so I believed I wasn’t. I was twenty-five years old by then. And I was mad.” She gets a job, opens a bank account and starts planning her divorce and their escape.

A naturally gifted storyteller, Simmons, has put her heart and soul into this cautionary tale of perseverance, hope and strength. Although set in the fifties, sixties and seventies, Pecan’s story could happen in any time and to anyone; and at times it read more like fact than fiction. Even though at times I wanted to shake Pecan for her resigned acceptance of Ricky’s abuse, and tell her she had a choice, I could understand how we sometimes end up in places we’d never imagined and don’t know how to get out of. How we don’t know how strong we can be until being strong is our only option. This is the story of how Pecan finally finds her strength, and when she does it will make you want to cheer.

Read Bravebird Publishing’s description of How To Knock A Bravebird From Her Perch (The Morrow Girls).