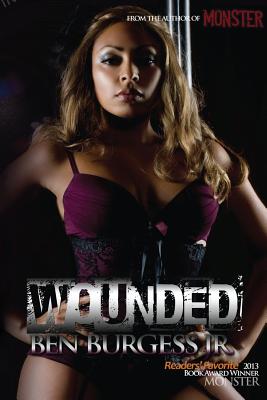 Read a Description of Wounded

As the headliner at a strip club, Samantha Miller is using her beautiful face and sexy body to get ahead, and hopefully make enough money to leave stripping behind and open a photography business. Although she dances for the men in the club and sometimes has sex with them for money in the VIP room, Sam prefers women. Men only remind her of the abuse she suffered as a young girl.

Wounded is a story of trials and tribulations, self-sabotage and betrayal, and proves that hurt people, will hurt people. Hurting people is something Sam does to those closest to her. Molested as a child and then pimped out at ten by her drug-addicted mother, Sam has only known pain, so she repays many of the people she meets in kind.

“I tossed and turned in my sleep. Visions of my childhood haunted my dreams. I felt the hands of those dirty men touching me. My dreams took me back to that abandoned truck in Hunts Point in the Bronx…

‘You gonna let me get that?’ the strange man asked, pointing at me.

He stared at me, his eyes dark as marbles. He smiled. I’d never forget his smile. Those gold teeth haunted me forever. I looked at my mother fidgeting. She hastily rubbed the sides of her arms. She wore a face of uncertainty and desperation. I’d seen her like this countless times. My mother was feenin’.

This situation played itself out many times in Sam’s childhood. Now an adult, the victim has become the victimizer, preying on women, specifically straight or married women. Sam loved “turning them out” because it was not only sexually fulfilling but it also gave her the sense of power she never had growing up.

“I met this woman… She was hanging out at a bar for lesbians and ended up leaving with one. She wasn’t too drunk or high. I made sure the choice was her volition… It was all just a game. With these green eyes, pretty face, and voluptuous figure, I had no problem attracting other lesbians. The real challenge was bedding so-called straights. Opening their eyes to a new world and awakening them to a realm that isn’t dominated by men is the greatest gift I can give another woman.”

Sam’s life of emotional manipulation, and sexual coercion take a sharp turn when she falls in love with Sasha, a “straight” cocktail waitress at the club who is sexually and emotionally conflicted. When forcing Sasha to come out to her highly religious parents has tragic results, Sam has to find the strength to not only go on but to turn her life around.

Although there is plenty of sex and violence here, they don’t feel gratuitous. They are more a means to an end, and a way of illuminating a life, and a lifestyle that was more accepted than chosen. At its heart, Wounded is the story of how childhood trauma can make you who you are as an adult; how it can alter the trajectory of your life, change your goals, and your ambitions.

Sam’s story is also about being true to yourself, even when your friends, your family or the world tells you to be something else. Although not gay, Burgess, who has a daughter and a Masters in Educational Leadership, has written a book that sheds light on the daily struggles that many gays and lesbians face. Hate crimes, being closeted, feeling ashamed of your sexuality, and religious hypocrisy are a few of the issues he addresses.

Wounded shows us that what is most important, is loving yourself and being with people who accept, love and affirm you. As Sam says at the end of the book, “There’s an old saying that time heals all wounds… It wasn’t time that healed my wounds—it was love.” What Wounded teaches us is that ultimately, only we can end the cycle of abuse, and that all our hardship and heartbreak is what makes us strong and resilient. It’s true, what doesn’t kill us, makes us stronger, even if we don’t know it at the time.

Wounded is an honest portrayal of the psychosexual fallout from emotional betrayal and sexual abuse. If you’re looking for a fast-paced, readable story that is in turn, touching and heartbreaking, you’ll find it here.