Book Review: Everything I Know About Zombies, I Learned In Kindergarten 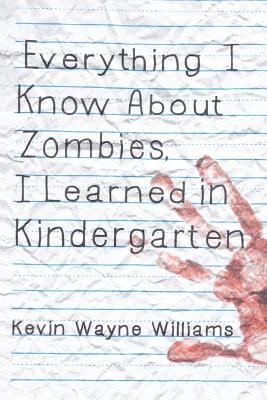 Read a Description of Everything I Know About Zombies, I Learned In Kindergarten

“When the apocalypse came, nine-year-old Letitia Johnson tried. She grabbed her little sister and her classmates and locked them all in a school bathroom. For five days, they hid. They hid while their teachers were being killed, while their classmates were being killed, even while the Bronx was being evacuated. Now there’s no one to help them. There’s no place left to hide. It’s just her, one ax, twelve kindergarteners, twelve garden stakes, and her will to live.”

In Everything I Know About Zombies, I Learned In Kindergarten those best equipped to survive the zombie apocalypse aren’t scientific or technological geniuses, or fierce, muscle bound warriors, or even survivalists armed to the teeth. Instead, the natural born killers with the keenest survival instincts, are a band of Latino and African American five-year-olds and their nine-year-old leader, armed only with garden stakes, backpacks filled with necessities, a copy of The Little Engine That Could, and their “buddy”, who is never far away.

When a bioweapon is released into the subway system, 200,000 people turn into zombies. Those zombies then infect more and more people until most of New York has to be quarantined, and the bridges destroyed to keep the zombies—and anyone unfortunate enough not to have gotten out—in.

How do you tell a story about the apocalypse, bloodthirsty flesh-eating zombies and the kindergarteners that learn to kill them by shoving garden stakes into their eye sockets? How do you make a macabre tale about murderous five-year-olds, who are sometimes killed and eaten, not only palatable but also enjoyable? Williams’ approach has been to treat the horror and gore almost matter-of-factly, he wisely does not dwell on the grisly details. Williams also treats the characters almost in outline. This helps to make the horrific events that befall them more tolerable because we care less about characters we haven’t gotten to know or love. But we also can’t have an emotional connection to them if we never get to know them, and if they are not fully developed.

There’s a lot going on here and it’s an interesting mash-up that sometimes works and sometimes doesn’t. It helps that in the midst of the madness Williams poses some thought-provoking questions about religion, authority and parental care. Foster child Letitia loses what little faith she has when she is forced to consider how God can allow so many horrible things to happen. The reader must grapple with how quickly segments of the population devolve and turn on each other. Perhaps the most jarring question is how is it possible that some of the children are better taken care of by nine-year-old Letitia during the apocalypse than when they were with their parents? Questions like these help you not really care that at the end, the story leaps forward and the reader isn’t quite sure how it got there, or who is even still alive. Or that there are so many undeveloped characters, that it is hard to keep track of them or care when they don’t make it.

That said; there is a lot to like in this fairly well written, and painstakingly researched story that puts a fresh spin on the zombie horror genre. Williams’ shifting point of view is as unnerving as it is intriguing. When we see the events from the children’s perspective and experience their daily routine of survival we are lulled into accepting what they are doing. But when the point of view shifts to the adults they meet, we see them through their eyes. The point is brought home that these are no longer children, they are something else, they are feral and ruthless, and possibly their best and only chance of survival. Especially since the adults either end up being thieves, rapists, useless, or quickly killed. “Alex decided that if he had to be accompanied by armed children, he couldn’t do much better than Jahayra and Kiara. If Letitia was a bulldog, Rosarita and Malik were Doberman Pinschers: you always had the impression that they were refraining from attack because a more entertaining opportunity might show up later. Jahayra and Kiara still seemed like children.”

If you like horror and you’re looking for something new, this is undoubtedly it. I applaud Williams for the excellent new spin he’s put on the zombie genre. He’s certainly convinced me that in the end, when the apocalypse brings out the worse in adults, it will be the children who save us; that is, if they don’t kill us first. I just wish he’d gone all in and created fully developed characters we could not only root for, but also cry for.

Read Mott Haven Books’s description of Everything I Know About Zombies, I Learned In Kindergarten.