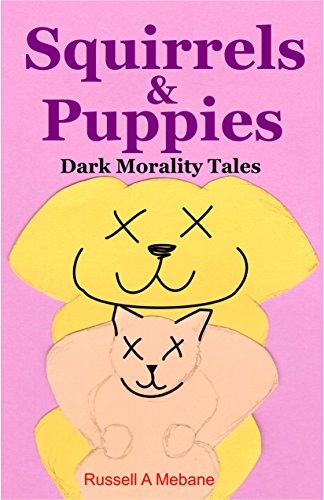 by Russell A. Mebane

In the foreword of Squirrels & Puppies, Mebane’s second book, the author has fun with the reader, saying in a tongue-in-cheek style that this collection has steered clear of the spiritual themes of his first book. His debut, Rape & Killing: Stories from a Strange Mind, got Mebane some notoriety in some literary circles.

Here, the “dark morality tales” range from the hilarious odd variety such as “The Woodchipper,” where Chipu the red squirrel has a human lover, but cannot get her pregnant to the blackly comic type as “Doggie Death Panel,” where five dogs – Sasha, Knickers, Mittens, Poopsy and Mr. Tinkles- serve notice tragically on their human owner in a way Dr. Seuss would have never conceived. Along this same theme, his story, “Feline and Femininity,” has the mother and daughter trying to figure out what’s wrong with Muffin, the cat. However, Muffin has got a hot surge of feline hormones and she’s in heat, needing some attention.

Hark, this is not Animal Farm or Chicken Little. Or even Harry Potter and his crew. This is something else. It’s wacky, created to toss a grenade into the minds of grown-ups, sprinkled with visuals of the absurd and surreal. There is a bit of good vs. evil in his light fable, “Smackey’s God,” going into the concept of divinity. Meanwhile, the macho parable, “Sexual Killing Machine,” celebrates the notion of supreme male sexual potency, the matchless masculine sex drive, until the perpetually horny gent with the great weapon between his legs meets his match. Some of the stories end with an abrupt twist such as “Player 1: Peter” and “Nu Yir,” and others finish with a rousing Old Testament reckoning like “The Karmic Backlash.”

With the last large section of sketches, “The Black Section,” Mebane warns the reader about his challenge of black myths and stereotypes, saying the stories are for entertainment only. He tries to combine the spiritual and the real in a gonzo mix of the metaphysical and ghetto happenings. I’m reminded of the old quicksilver magic of a classic Holloway House book, The Nigger Bible, where the author attempted the same approach. That book somewhat worked while Mebane’s creations often hit their mark and simply provide a nod of approval for their conception.

While this section reads like a chronicle of current events, political and cultural revelations, and social defects, Mebane’s work owes a lot to the visions of Amiri Baraka, Ishmael Reed, Hunter Thompson, Roald Dahl, and the Brothers Grimm. Still, when he makes some valuable insights about the modern condition of the post-Obama racial America, the book scores mightily. “We attribute our shortfalls to the Whites, but we have neglected to correct them. Because of this the war is over, and it has no victors,” Mebane writes. (pp. 181 – 2nd graph)

Squirrels & Puppies is zany, outrageous, and full of magic moments that strain the mind. There is a bit of smoke and mirror here too, but none of these things detract from that there is a work of some originality in these pages. Mebane is a maverick griot with a sense of visual gags and naughtiness. He deserves a higher profile and this book may help him get there.