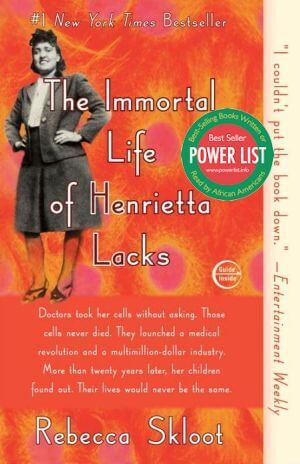 Read a Description of The Immortal Life of Henrietta Lacks

"Henrietta died in 1951 from a vicious case of cervical cancer… But before she died, a surgeon took samples of her tumor and put them in a Petri dish. Scientists had been trying to keep human cells alive in culture for decades, but they all eventually died. Henrietta's were different: they reproduced an entire generation ever 24 hours, and they never stopped. They became the first immortal human cells ever grown in a laboratory.

Henrietta's cells have now been living outside her body far more than they ever lived inside it… If we went to almost any cell culture lab in the world… we'd probably find millions—if not billions—of Henrietta's cells in small vials on ice.

Her cells were part of research into the genes that cause cancer and those that suppress it; they helped develop drugs for treating herpes, leukemia, influenza, hemophilia, and Parkinson's disease… Henrietta's cells have become the standard laboratory workhorse.
HeLa cells were one of the most important things that happened to medicine in the last hundred years."
—Excerpted from the Prologue (pages 3-4)

Anybody who thinks that the medical establishment's secret exploitation of African-Americans in the name of science ended with the notorious Tuskegee Experiment of 1932 has another thing coming. Those familiar with the book Medical Apartheid are well aware that such nefarious practices have persisted to the present.

However, the little-known case of Henrietta Lacks has got to be one of the most jaw-dropping yet. Born in Virginia in 1920, she grew up working in the fields on the same tobacco farm in tiny Lackstown where her ancestors had toiled for generations as slaves. She married and became a mother of five until, in 1951, she developed a very aggressive form of cervical cancer and passed away a few months later at the tender age of 31. She died a pauper and her remains were buried in an unmarked grave.

That might very well have been the end of the story, except for the fact that, without her consent or even knowledge, doctors took a sample of her cancerous tumor. As it turned out, her rapidly-reproducing malignant cells had a unique quality in that they were miraculously immortal. Eureka! Cultured in the lab by research scientists, the landmark discovery would prove to be invaluable in the development of everything from the polio vaccine to in-vitro fertilization to the Genome Project to cloning.

It goes without saying, but I'll say it anyhow, that the manufacture and sale of these so-called HeLa cells (a name coined by taking the first two letters from Henrietta and Lacks) blossomed into a multi-million-dollar business. Patented and selling for as much as $10,000 per vial, the precious substance has for decades returned quite a fortune for a couple of biotech companies. Yet, the impoverished descendants of the donor never shared in the profits. To add insult to injury, many of them couldn't even afford health insurance.

This shameful chapter in the annals of American medicine is revisited in The Immortal Life of Henrietta Lacks, a remarkable biography written in riveting prose by investigative journalist Rebecca Skloot. Very rarely do you come across a book this compelling about a relatively-obscure individual.

Thus, high praise indeed is in order for the author for fashioning such a compelling narrative of her humble subject's life, death and everlasting gift to humanity, while simultaneously shedding light on some serious ethical issues which had been conveniently swept under the rug until now.


Read Knopf’s description of The Immortal Life of Henrietta Lacks.