Book Review: The African Americans: Many Rivers To Cross

Read a Description of The African Americans: Many Rivers To Cross

Above all else, this book is concerned with showing that even in the midst of great political adversity and personal vulnerability, even under the harshest conditions, black people for 500 years have explored the fullest range of human emotions and actions, falling in and out of love, inventing novel ways to worship, stressing over the fate and fortunes of their children, and wondering about God’s purpose for their lives and their afterlives.

In other words, the Black Experience is just one wondrous rendition of the larger experience of being a human being and collectively fashioning a civilization.”
—Excerpted from the Introduction (pages xi-xii)

By and large, the history books have marginalized the African-American community by either omitting or minimizing its cornucopia of contributions to the country. Similarly, the African-American psyche has been trivialized by a host of harmful stereotypes which suggest that we aren’t as diverse or as capable of experiencing the same full range of emotions as Caucasians.

How else can you explain that the Mayor of New York City might rationalize employing the “stop and frisk” police tactic against blacks in wholesale fashion, as if criminality is a racial trait instead of judging people by the content of their character as envisioned by Dr. Martin Luther King a half-century ago? Fortunately, The African Americans: Many Rivers to Cross has just been published in the face of such persisting, institutionalized prejudice. 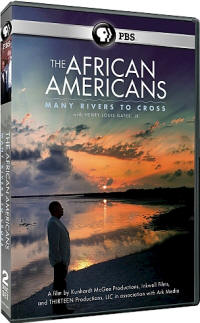 Co-written by Harvard’s Dr. Henry Louis Gates and Dr. Donald Yacovone, the book is basically a companion piece to the 6-part television series of the same name that’s set to premiere on PBS on October 22nd. But this relatively-encyclopedic opus has been afforded the luxury of being able to explore the same subject-matter in much greater depth.

Arranged chronologically, it starts with a chapter covering the period from 1500-1540 when Africans first arrived in the so-called New World. Next comes the period during which skin color-coded slavery became institutionalized, followed by 1700-1811, which the authors dub “The Age of Revolutions.”

That’s followed by “Half Slave, Half Free,” the awkward ante bellum era when many Africans were emancipated while the majority remained in chains. Subsequently, in succession, came the Civil War, Reconstruction, lynchings and the rise of the Klan, en route to the Harlem Renaissance, the Civil Rights and Black Power Movements and President Obama in the White House.

An engaging journey through African-American history from a fresh perspective reflecting the rich inner lives of black folks irrespective of station.

Read SmileyBooks’s description of The African Americans: Many Rivers To Cross.