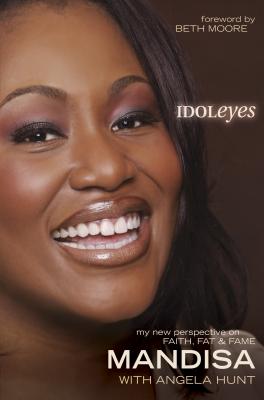 Read a Description of Idoleyes: My New Perspective on Faith, Fat & Fame

Mandisa Hundley may well go down in history as the most talked about American Idol participant who did not become the season's winning entrant. From her first audition for Atlanta radio station WSTR where she was one of six finalists who were invited to come in and sing live on the air, to the night that she was eliminated as one of the top nine finalists, Mandisa journey into the American Idol world was a life changing experience for the Born-Again Christian woman.  To say it was a faith walk for her and her supporters is a gross understatement.  Her new book,  IDOLeyes: my new perspective on Faith, Fat & Fame succinctly tells the story.

One thing was apparent from the very beginning, Mandisa can sing.  Her voice is one of the most awesome natural gifts that a singer can possess.  The range, the deep soul stirring timber that rises with ever note is a dream come true.  There was never any question that she was one of the better singers in the competition.  The differences that set her apart from the other contestants were probably the differences that kept her from attaining the winning spot.  Mandisa is a plus-sized Christian beauty who did not sacrifice her faith nor her beliefs to satisfy America.  Mandisa stayed true to her soul and that is what she expresses in her new book.

Written with Christy Award winning author, Angela Hunt, IDOLeyes is a play-by-play account of MANDISA’s  American Idol experience.  The reader is privy to every minute,  from the behind-the-scenes stories of the interaction between the other contestants, the fans' reactions and behavior, and the difficulties that Mandisa's weight and faith caused her throughout the competition.   MANDISA bears her soul in this book giving her side of the story of a gifted and determined young woman who goes from near obscurity to celebrity status.  It was a walk on the wild side for someone whose only vision was to glorify the Lord in all that she set out to do.  IDOLeyes is the story of a young woman living a Christian life in a secular world.  She recounts how she allowed her elimination to cause her to lose sight of the will of God in her life and how she fell into a deep depression, despite being a strong believer because she misunderstood the voice of God that she felt was leading her to another place.  She expected to remain in the final three, but found herself being sent home before the final show.  She began to question her closeness to the Lord and her discernment of His will for her.  She felt lost and alone and refused to allow the Lord to comfort her.  The experience changed her faith as she had come to know it.  She tells how she found her way out of the funk and got back in the game of life.

Although Mandisa's voice reigned supreme; her body image was not the American Idol image.  Being a fat, Black woman took away from her vocal talents.  When Simon made his caustic, unkind remarks about her weight on national television, she was devastated but she had the faith and the strength to pray her way on to the next level.  In her book MANDISA  confronts her issues with food addiction and comes to grips with the past that contributed to her becoming an overeater.  She opens with; ’Hello.  I'm MANDISA, and I'm a foodaholic.’  MANDISA grew up in Citrus Heights, California near Sacramento after her parents divorced, living with her mother who was a working single mother.   She spent a lot of time after school alone in front of the TV with only her favorite snacks to keep her company.  She remembers that this is when she began to gain weight as a child.  The book also talks about how consumed this society is with weight and body image and shows how fat prejudice is just as prevalent as race prejudice.   In acknowledging her weight problems; during the competition she made a effort,  choosing to eat healthily and changing her eating habits.  Her perspective on fat and faith is that God can help you overcome any and all addictions.

The Fisk College graduate always remembers wanting to be a singer, but the shy and introverted little girl who sat on the sofa with only the television and her snacks to keep her company was afraid to reach out and snatch her dream even though she had the talent. She majored in music with a concentration in vocal performances and performed in many school productions.   She had given her life to the Lord at an early age and soon ministered in music and song.  She worked in customer service after graduation for a Christian book company while working as a worship leader for Beth Moore's Living Proof Conferences and singing back up for various artists on their CDs.  She was comfortable doing studio work and conferences but still had a burning desire to take her voice further.  Eventually; she submitted to that desire and asked the Lord to enlarge her portion.  Mandisa finally found the courage in her faith to audition for American Idol.

Mandisa's American Idol experience changed her life and she did a wonderful job telling the story in book form.  I enjoyed reading Mandisa's story and gained a lot of spiritual knowledge.  I look forward to her new CD and modeling contract with the Ashley Stewart clothing chain.