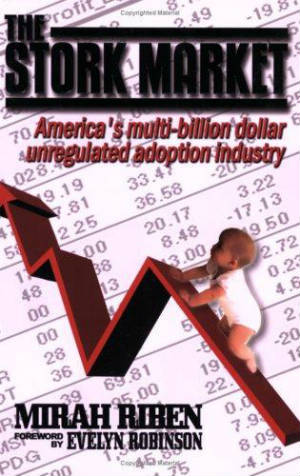 ’Adoption pits woman against woman, rich against poor, making it painfully difficult to look at and admit. Adoption is racist and classist and often exploits women and commodifies their babies.

Mothers who are resourceless and struggling to keep their family together can either be offered the help they need to stay together or be seen as a source of supply to meet a demand. Mothers and other family members in developing countries unable to feed their babies could be sent the funds they need to do so, or have their misfortune exploited for another's advantage.’
’Excerpted from Chapter II (p.19): Motherhood, Myths and Metaphors

In the rush to anoint icons like Madonna and Angelina Jolie for sainthood following their adoptions of babies from Africa and Asia, no one seems to be stopping to ask how widespread this practice might be or whether it's in the best interest of the children and their birth parents. But common sense ought to tell you that no mother really wants to surrender her offspring to a stranger from another culture or country, especially when the reason really has more to do with money than with maternal instincts.

Sadly, this readily identifiable and burgeoning phenomenon is not at all limited to celebrities, but a big business which is depleting the Third World in much the same way those regions have been drained of their natural resources. Fortunately, one intrepid reporter, Mirah Riben, has had the guts to investigate this shameful trafficking in infants, and she is now blowing the cover off the racist racket in The Stork Market: America's Multi-Billion Dollar Unregulated Adoption Industry.

In fact, Ms. Riben has been speaking out about the need to reform, humanize, and de-commercialize American adoption practices for nearly three decades. She first started to shed some light on this complex issue back in 1988 with the publication of her previous book, The Dark Side of Adoption. With a slightly shifted focus, The Stork Market is a thoroughly-researched expose’ which zeroes-in on every aspect of the black market baby trade.

As a staunch family advocate, the author also takes aim here at the foster parenting system, pointing out that ’The same funds used to support foster care could be used to help preserve families and eliminate child removal.’ However, the bulk of this invaluable book covers the corruption in the adoption industry: the scams, coercion and exploitation rampant in a market based on supply and demand where prices are based such factors as age and skin color, and the cost of the ’merchandise’ is set as high as the often desperate consumers are willing to pay.

Highly-recommended for anyone touched by adoption in any way, whether considering it, working in the field, or if simply interested in child protection and family preservation.