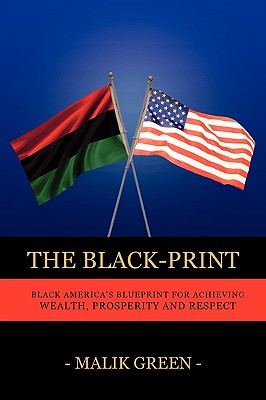 Read a Description of The Black-Print: Black America’s Blueprint For Achieving Wealth, Prosperity And Respect

Malik Green is passionate and somewhat angry about the status of the descendants of African slaves living in America. In his debut, ’The Black-Print,’ the New York author gives a history of African-Americans, their plight from slavery to present day, and proposed solutions to problems ailing black Americans.

So what are some of the problems plaguing African Americans according to Green? There are several, including the failure of African-American people to reunite with its indigenous culture, their desire to be American before being philosophically and spiritually African, and the inability of wealthy African-Americans to share their wealth with poorer blacks.

What's interesting is that Green doesn't just complain about the issues facing African-Americans. Instead, he offers specific and detailed solutions to repairing these problems. Among the solutions includes the union of all African-American nonprofit organizations (such as the NAACP, 100 Black Men, and The Urban League), the pursuit of reparations for the descendants of slaves, and using leverage in the political arena to get what the black community wants. The author also targets the entertainment industry, law enforcement, religious organizations, and financial institutions in his quest for change.

While some of the points the author makes seem all-too-familiar if you've read works such as ’The Covenant’ by Tavis Smiley, ’Race Matters,’ by Cornel West or even ’All About Love,’ by bell hooks, the author still brings to light some very valid issues affecting the progress of African-Americans as a whole. For example, he is right on point when suggests the election of America's first black president may be erroneously cited by conservatives as proof that racism no longer exists. He addresses the issues of black flight from black neighborhoods in regards to how it affects the neighborhoods left behind and what happens when black people move into these homogenous neighborhoods that don't want them. He also has some great solutions regarding parent involvement with PTA associations and more. Green certainly did his research on these issues.

However, there are some things one might take issue with. For example, the author doesn't consider that middle class African-Americans may move away from black neighborhoods simply to escape crime-ridden streets and sub-par public schools. Can you really blame people for wanting a better and safer life for their families? Also, the author's idea of rich African-Americans lifting up poor blacks in a Talented-Tenth fashion is a bit outdated and unrealistic. While some rich people may donate a small portion of their riches to worthy foundations, it is doubtful that they can or will give enough to make a significant difference in a vast amount of people's lives. And finally, we must address the reality of a call to action after the excitement of reading these solutions is over. Did The Million Man March or Smiley's ’The Covenant’ change a majority of people's lives? Why will this book by a lesser-known name be any different?

Overall, ’The Black-Print’ is a solid and thoroughly researched book definitely worth reading cover to cover. Malik Green is passionate and cares deeply about the plight of his people. The question is: will his passion be enough to motivate them into the action he suggests?