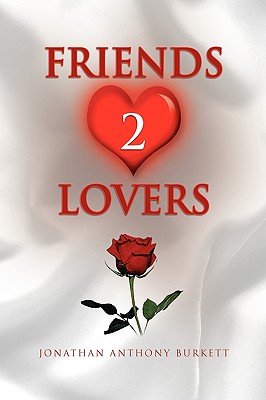 Read a Description of Friends 2 Lovers

Who doesn't remember their first love? And what about the girl next door? Or how about the boy you cared for in school only to end up in the friend zone? In Jonathan Anthony Burkett's new novel, he attempts to capture that feeling young people get when the bonds of friendship mature into something stronger.

"Friends 2 Lovers" is the story of high school best friends Claude and Kelly that spans over a two and a half year timeframe. Though they have been best friends for many years, everyone from their friends, family, and the protagonists themselves know that they are destined to be together. After all, the best romantic relationships start off as friendships anyway, right? Even Kelly's mother loves Claude like a son. However, it's the actions that transpire with Claude's family that could threaten this relationship and even his life.

Claude's dad Charles has a past that catches up to him at the very worst time for Claude, when his future looks the brightest. That past results in an all-out brawl involving Claude, Charles, Claude's brother Troy (a 20-year old high school senior), and a father and son pair of thugs named Stanley and Robert. When the unthinkable happens, Claude must muster up the strength to either pick up the pieces and move on, or simply just end it all himself. His solution may surprise you.

Give newcomer author Jonathan Anthony Burkett credit for penning a novel meant for a younger generation and the realities of the world many of them deal with today, such as school violence, friends in love, suicide, and tumultuous family relationships. The author was on the right track with the idea of a story of a patriarch whose past not only catches up with him but affects the lives of those who love him most. Plus the idea of young people who want to be together for the sake of love and not just pleasure is refreshing in this day and age. Perhaps he will find his audience in diehard romance readers, those who enjoy books with somewhat of a Christian theme, and those who can appreciate the PG nature of the language.

Still, there are far too many issues with the book to call it a must read. This includes a predictable ending (the title pretty much sums it up), lazy narration that tells readers what happens instead of showing them, and awkward dialogue, including proper-speaking thugs ("They wanted payback badly, Dad. I guess the kind of payback that they thought would be the best was to get me while I was by myself, Dad…"). And this character is supposed to be hard? Not only that, but many of the characters are underdeveloped and are rarely described physically. And the plot, which gets off to a fairly decent start, meanders into Nytol territory.

The final result is a finished product that reads more like a workable early draft instead of something readers should plop down their hard-earned money to buy. But just because one person doesn't love it, doesn't mean another won't at least like it.